Remember the rip off artists that brought you the horrific Fort Myers Marathons?!?  Their reputation finally caught up with them and they are no longer allowed to bring races into Lee County.  Another group is giving them a run for their money.

Elite Events has been around for about five years now.  The company operates out of Naples and puts on a little more than a dozen events a year.  The for profit company tries to pass itself off as a fundraiser for non-profits but don't kid yourself, the owners are in it for the pay day.

The promise of fancy finisher medals and tech shirts lure unsuspecting runners into their races that are generally on terrible courses that sometimes lack port-a-potties and enough water to take care of the runners needs.  Worse still, earlier this year Elite Events cancelled a triathlon then refused to give any of the entrants refunds. 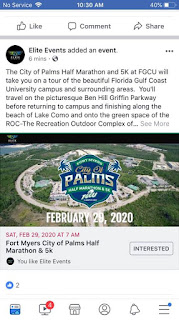 Then there is their new entry into Lee County, the City of Palms Half Marathon.  For the past dozen years the Fort Myers Track Club has held a half marathon the first weekend in March which is well organized, offers plenty of goodies and is run on decent courses. Elite Events decided to sneak a race onto the calendar on the same weekend this year.

What unsuspecting runners got for their $109 entry fee (half off if they got in early) was a half marathon run on sidewalks, in and out of cul-de-sacs and yes, no port-a-potties plus they ran out of water.  These guys are too cheap to hire law enforcement to run their races out on the roads.  That's what a road race is supposed to be... a race on the roads.

To add fuel to the fire Elite Events is hinting to the Fort Myers Track Club that FMTC should adjust its race calendar to accommodate their race.  Yes, it appears they think their craptacular half marathon should supplant a top notch half marathon run through some of Fort Myers nicest neighborhoods with plenty of water stops and free beer and wings at the finish.

My major complaint about these guys is that it hurts the true not for profits that actually give back to their respective communities, the Gulf Coast Runners of Collier County and the Fort Myers Track Club of Lee County.  Both of these groups give every dime of the money they raise back to local charities.  The Gulf Coast Runners give thousands of dollars in scholarship money to Collier County athletes.  FMTC gives away scholarship money and supports numerous non-profits such as Barbara's Friends, Gigi's Playhouse and the Golisano Children's Hospital.

All Elite Events does is hurt attendance at the races put on by the legitimate GCR and FMTC while giving road racing a bad name.  The local road racing scene is already saturated.  Too many groups look at 5K's as an easy way to fund raise when in fact it's not all that unless you have the right support and establish a reputation as a first rate operator.

Elite Events isn't going to go away because I've written a rip about them.  I would just ask runners in Southwest Florida to think twice before chucking their hard earned money to some operators who don't work to actually support the communities they serve.  They only work to put money into their bank accounts.

Posted by Rink's Ramblings at 8:06 PM