The marathon pulls at anyone who considers themselves a distance running.  Once you've given it a go you begin to think and scheme about how to do another one and run it better than the last.  I went into the spring of 1977 with a goal of running a sub-3 hour marathon.  Given the way I trained, it wasn't a very realistic dream.

I had run consistently through the spring.  I had even put in one ten mile run, that's right, one ten mile run two weeks before the marathon.  But I was in very good shape.  I ran an open mile at a high school track meet about a month before my planned race in Wichita.  The mile in Topeka gave me a lot of confidence.

I ran along in that race with an experienced marathoner, Rex Lane.  Rex had encouraged me to run the Wichita race where he was planning on running 2:45 if not better.  Rex and I raced along together in the mile as we watched Lowell Paul, a member of a world record setting 4 x 880 relay team pull away to a 4:14 mile.  Rex and I split the finish line together in 4:45.  Rex was exceedingly happy to stay stride for stride with me to the finish and I was shocked that I could run under 4:50, much less on a cinder track. 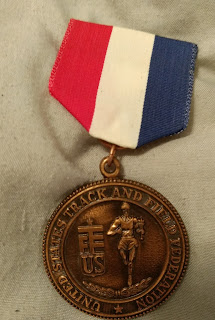 So at the end of May, Rex and I toed the line at the United States Track and Field Federation (USTFF) marathon in Wichita.  USTFF was a poor man's national championships designed mainly to be a thumb in the eye of the  Amateur Athletic Union.  The AAU was the 800 pound gorilla in track and field back then and it was hated by coaches and athletes alike.  The annual meet in Wichita offered world class competition, although our marathon field was mostly first rate collegians.

It promised to be a warm day on a rolling course taking us from Wichita State University into west Wichita and beyond.  I immediately took up with a high school senior excitedly running his first marathon.  We talked and kept each other calm as we clipped along at 6:30 mile pace over the first seven to eight miles.

By mile ten the high school kid was gone and I was in a no man's land between groups of runners.  I was slowing but not significantly.  In fact, as we hit a stretch of gravel road I was passing runners here and there.  My only significant late race memory is hitting the last water table at around 21 miles and thinking it was getting really hot.

The last five miles were a grind, but I knew I was going to break three hours if I didn't completely fold up.  That thought and feeling carried into the gates of the stadium where I circled a half lap of the track, hitting the finish line in 2:57:14.  Much to my surprise there stood Kansas coach Bob Timmons, grinning ear to ear.  He was honestly happy for me and congratulated me on the finish.  It meant the world to me.

Rex had run a couple of minutes under 2:50 and he was shocked to see me. I told him  my time it would be just under three hours or a 3:15 blow up and I think he was betting on the latter.  I was 21st overall out of more than 100 runners.  The race was divided between open runners and collegians.  Since I wasn't running for a college team I was considered open and claimed the third place medal in the open championship.  Yep, I was technically third in the nation at a national championship.

The Wichita race is one of the dozen most satisfying races I have run.  I had run smart, in control and paced myself properly based on my condition.  I had conquered a barrier, three hours, that every marathoner dreamed of and I did it at the age of 21.
Posted by Rink's Ramblings at 5:36 PM