A week into the Olympic Games where Michael Phelps rose like a phoenix and Gabby Douglas became America's latest gymnastics sweetheart.  But nothing could stir the sporting soul like the period between 3:45 p.m. EST and 4:45 p.m. EST but you wouldn't know it watching NBC's coverage.  The Brits enjoyed a golden hour of athletics.  First Jessica Ennis overcame her many critics to capture gold in the Heptathlon.  Shortly after her victory Greg Rutherford seal his surprising gold medal in the Long Jump.  As that event wrapped up more than 20 men circled the track running 10000 meters.  You had to watch it all unfold on the Internet to watch history unfold in real time.

Running for Great Britain was Somali transplant Mo Farah.  It was a bruising competition.  The Eritrean runners continually pushed and shoved Farah during the first half of the race, trying to throw him off his game.  Farah also had to deal with the Kenyans and Ethiopians who were ready to steal his gold.

The real racing didn't begin until 5 laps remained in the competition.  3 Ethiopians, 3 Eritreans, 2 Kenyans, Farah and his American training partner Galen Rupp appeared poised to battle it out over the last 2000 meters.  It was a chess match, no one wanting to push the tempo too hard.  The Ethiopians trying to keep it under control for Kenenisa Bekele, who was seeking yet another Olympic title.  The Kenyans looking lost and confused over whether to push the tempo or wait and kick.  Rupp and Farah simply ran with confidence biding their time. 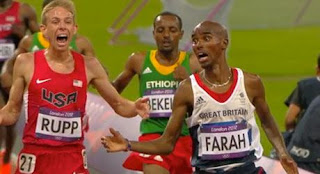 It came with 500 meters to go.  Farah seized the lead and dared the field to catch him.  Rupp, bravely held on as the race for the podium fell to just 6 runners down the backstretch.  Farah never faltered, running away from the field coming off the final turn while Rupp gathered himself and sprinted around three other runners into 2nd.  It was amazing stretch run, the British crowd roaring for Farah and Rupp sprinting after his training mate in wide eyed surprise as he realized they would go 1-2.

As much as this first ever gold at 10000 meant for Great Britain, Galen Rupp's silver means just as much for U.S.A. distance running.  It marked the first American medal at 10000 since Billy Mill's spectacular sprint to gold in the 1964 Tokyo Olympic Games.  Rupp is standing on the precipice of becoming the greatest distance runner in American history.

Now both men will figure in the hunt for medals at 5000 meters next week.  Alberto Salazar has proven himself as one of the great distance coaches of his generation, having guided both Farah, Rupp and Dathan Ritzenheim who finished a respectable 13th in this incredible race.  As great as Salazar was as a runner, he's now proven himself an even greater coach.

Finally, this medal marks redemption for Rupp.  He has been the whipping boy for almost a decade for nasty critics who grace the message boards of websites like Let'sRun.  They've questioned his toughness and his finishing speed.  They hate his association with Salazar and the advantages that training at the NIKE facilities give him with its state of the art technology.  Most of all I think they were envious of his success.  Galen Rupp has seen success at every level and whether they know it or not, an Olympic silver medal is a huge success.  Just ask Jim Ryun.

Editor's note:  Just wanted to add that it's a shame that American Matt Tegenkamp did not compete better in the 10000.  Matt, who hails from Lee's Summit, Missouri, has had an incredible career and still holds the American Record for 2 miles.
Posted by Rink's Ramblings at 3:32 PM