A Slice of the Moon and Lighting too!

Tonight I rolled out of my home into the dusk soaked humidity that only Southwest Florida can produce in August.  As I slowly trudged out of my neighborhood to the asphalt trail I could look to the west at a sliver of the moon, much like the Dreamworks logo minus the little boy holding his fishing pole.  To the northwest miles away a massive thunderhead produced the occasional spectacular flashes of lightning to help take my mind off of my misery. 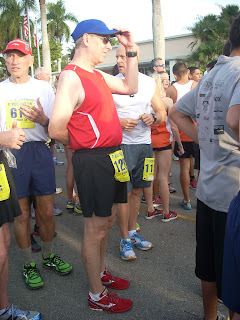 As difficult as it is to believe, my belly is a lot larger than as pictured from a February road race where I ran pretty well.  But that was a little more than ten pounds ago.  Three months worth of injuries has taken its toll.  What I find difficult to believe is my first few runs over the last two weeks have been at such a slow pace I am left wondering where the heck did any semblance of fitness.

I've had multiple surgeries and worse injury bouts than this last one but within a week I was able to roll along at a relatively decent pace.  Right now a 9:30 mile feels lightning fast.  I can slog along with no problem, probably even as far as ten miles if I wanted to risk it.  But the thought of trying to pick up the pace to something that resembles real running is out of the question right now.  My guess is it's going to take at least six weeks to get my legs back.

Fortunately for me there are no major road races that I want to run until November and even then I'm not sure I want to take on a 5K.  This is going to be an awfully long trek into fall and an even longer one into winter.  I think I'm going to have to take some serious long run medicine with the wonderful women I met last spring in the relay across Florida. They meet every Saturday morning around 5:30 a.m. to get in 10 miles or so.  They trek along at a pace that I can barely handle right now.  It will be a good dose of humility, reality and conditioning that should go a long way in helping me shed the extra 15 pounds or so I'm carrying.

So watch out Maria, watch out Jamie, watch out Dana and Andrea.  The old fat man is back in business and is in need of some tender loving LSD with his favorite group of crusading distance gals.
Posted by Rink's Ramblings at 6:14 PM