12 men toed the line tonight for my favorite Olympic event.  The men's 1500 meter run.  The experts were pondering whether American Matt Centrowitz could duplicate his shocking accomplishment from last year's World Championships by taking a Bronze medal.  Another American stood beside him at the start, a tiny figure born in Mexico, but raised in Texas, Leo Manzano.

Leo Manzano first popped onto my radar nearly a decade ago when he appeared out of nowhere at the Kansas Relays to set a meet record in the boy's 800 meter run.  I scratched my head and wondered where the heck this kid from Marble Falls High School came from?  Rarely did runners travel all the way from Texas to run the Relays plus I prided myself in knowing the top high school kids in track and field. Manzano wasn't on my radar at all.

He went on to an outstanding career at the University of Texas where he built upon an outstanding high school career.  Leo won 4 NCAA titles and showed an uncanny ability at the college level to run well off of any pace.  Yet his times in college, while good, didn't indicate greatness.

Manzano was an accomplished runner no doubt but hardly ballyhooed like my running hero Jim Ryun.  The Kansas great set world records and went into the Mexico City Olympics as a Gold medal contender.  Were it not for the altitude of Mexico City and the team tactics of the Kenyans Ryun might have been able to beat the great Kip Keino.

I remember the intense disappointment sitting in front of our black and white RCA TV in Abilene, Kansas watching Ryun helplessly try to close the massive gap Keino had opened up going into the last lap.  Keino ran a stunning time, 3:34.91, perhaps the greatest 1500 ever, considering the track sat at 7,350 feet.  It was pure agony 44 years ago for this 12-year-old.  I can only imagine the heartbreak for Ryun.

Now in London, Leo Manzano was toeing the line, not even picked by the experts to make the finals.  The Czarina loves Manzano.  He's only 5' 5" which means most other middle distance runners tower over him.  She loves the scrappy determination he shows when running the last 150 meters of a mile or 1500.  But all too often in big events, Manzano seemed to lack the tactics and the explosive speed needed in a championship final. 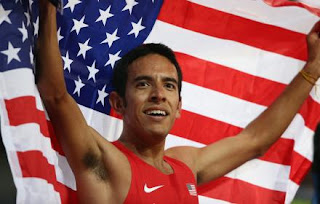 But not in 2012, this Texan was destined to stand tall.  No, Leo didn't win.  Leo came away with a Silver medal just like my hero Jim Ryun.  I watched with unbridled joy the BBC web feed of the 1500 finals this afternoon.  At first I thought it was Centrowitz who was going to burst down the final stretch but Manzano had run a perfect race positioning himself to slingshot down the track over the final 100 meters.

The winner, Taoufik Makhloufi of Algeria, used all sorts of deception to work his way into the finals, undoubtedly faking an injury to get out of the 800 to save himself for the 1500..  His speed from 1000 meters to 1400 was unbelievable and he gave him a gap big enough for Gold.

And now I sit in front of the television with the Czarina waiting for NBC to show the 1500 finals some seven hours after it happened.  The Czarina has no idea what happens.  I can't wait to see her joy when her favorite miler grabs Olympic glory and America's first Olympic medal at 1500 meters in 44 years.
Posted by Rink's Ramblings at 7:06 PM