Once upon a time baseball ranked at the top of my list of sports love affairs.  It was the sport I first embraced when the light bulb went off in my head that men like Sandy Koufax and Mickey Mantle existed.  About that time my mother got me a subscription to Sports Illustrated and I was hooked.

I loved the game's history.  I studied it with a passion, paging through the Baseball Encyclopedia, devouring the statistics, debating the merits of different players with my friends.  Tucked away in the list of great players and teams were the Boston Red Sox of the late 1940's.  You look at that lineup and wonder how the hell is it that they didn't make more trips to the World Series.  Oh yeah, the New York Yankees were a major roadblock, but those Red Sox teams were loaded.

David Halberstam chronicled the four core teammates of those great teams in a 2003 book called, "The Teammates:  A Portrait of Friendship."  The story revolved one of baseball's greatest hitters Ted Williams and his relationship with three other teammates, Bobby Doerr, Dom Dimaggio, and Johnny Pesky.  It is a wonderful read, peeling away Williams crusty exterior by detailing the enduring friendships he had formed with these three wonderful ballplayers. 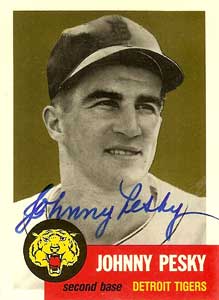 Johnny Pesky died today at 92.  He was a slick fielding shortstop who hit for average but not much power.  He hit only 17 home-runs in his war shortened career but has the honor of having the right field foul pole in Boston's historic Fenway Park named after him.  Of the four teammate only Doerr remains, at age 94.  Williams died a decade ago, Dimaggio in 2009.

When I see news that a great ballplayer like Pesky die I feel a twinge of in my heart.  My mind races to some of the all time greats still walking this earth, men like Stan Musial and Yogi Berra.  They ruled the sports world when baseball was still America's past time.  The pace of life was a little slower.  There was no Internet, no sabermetrics to weigh every stat each player produced, free agency was years away.  Heck, America's interstates weren't even complete.

They were part of America's greatest generation.  Go read Halberstam's book then read anything by Roger Angell about baseball.  Great books about baseball remind me why I once loved the game so much.
Posted by Rink's Ramblings at 7:16 PM