I'm suffering from Olympic fatigue.  Never have I been so happy to see the Olympics come to an end.  That's saying a lot considering my love of track and field.  The performances at Olympic Stadium in London did not disappoint.

What did disappoint was NBC's presentation of the Games.  The horrific web feed was a buffer mess chalk full of endless commercials which ruined the continuity of the broadcast.  The prime time shows aimed at the lowest common denominator, with lousy commentary and even worse analysis.  The only interesting bits came from Tom Brokaw and Mary Carillo with their stories of British history and tradition.

The BBC delivered in spades.  The few chances that I got to watch through a web stream showed what Olympic coverage can truly deliver.  The race calls were thrilling, the analysis insightful and even though the BBC focused on their athletes, they gave the proper amount of coverage and respect due to the other athletes competing for other countries.  It wasn't personality or star driven like NBC.

NBC decided before the meet started who the stars are and that bit them in the ass more times than I care to count.  Lolo Jones stands out the most.  The amount of coverage given to her compared to Dawn Wells, who owns both an Olympic Gold and Silver medal was about 10 to 1.  Galen Rupp and Leo Manzano deliver historic performances in the 10000 and 1500 and it merits barely a blip in the prime time coverage.  Instead with are deluged with scantily clad bikini beach volleyball players who couldn't cut it in indoor volleyball and BMX bike racers.  But enough of my rant. 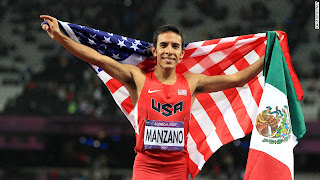 The track and field portion of these games were amazing. Meb Keflezighi's amazing run from further back than 15th place to finish 4th in the marathon is nothing short of amazing.  Even though he didn't medal it ranks right up there with the Silver medals snagged by Rupp and Manzano showing the terrific comeback in American distance running.

The biggest hero of the American effort to me is relays coach Jon Drummond.  The former sprint great got the most out of four relay squads.  The women delivered 2 Gold medals and a World Record in the 4 X 100.  Despite two Silver medals from the men's squad both teams did great considering the injuries and the dominating presence of one Usain Bolt.  Kudos to Drummond for getting such great performances out of all four relay teams.  America's track and field team brought back 29 medals and with a bit of look could have won 3 or 4 more.

The most magnificent run came from Kenya's David Rudisha.  His 800 meter world record was a stunning one man show that clearly stamps him as the greatest at two laps in history.  I wouldn't be surprised to see him return in 2016 and claim Gold in Rio.

Finally, there's Bolt.  He pronounced himself a legend while taking a well-deserved shot at America's greatest track and field Olympian, Carl Lewis.  Bolt's is much like Muhammed Ali, full of bravado.  I think his words won't play well in the United States.  Let the journalist and fans pronounce you a legend.  Let your running speak for itself.

In the end none of us should be fooled by what we see on the track.  Drugs remains a serious problem in the sport.  The IOC and IAAF don't want to do anything to inflict further damage on a sport that sees its fan base eroding.  I'm not saying Bolt is a doper, I simply don't know.  But I think you could easily spot a lot of chemically enhanced performances in London.  The real winners are the chemists who keep creating concoctions that stay just one step ahead of the testers.  It leaves me in doubt and feeling empty about a sport that I truly love.