Delta Force, to the Power of One 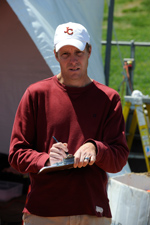 Tomorrow afternoon a 40 something junior college coach will sit down in front of a computer or a television set to watch one of his progeny will take to the track in London in a quest for Olympic glory.  Mike Bloemker is a very successful track and cross country coach.  He made his bones first as a private coach working out of the now Health Plus club in a Kansas City suburb.

Bloemker was hated by a handful of spiteful high school coaches.  He took several high school boys and girls, trained them properly, turning many into state champions.  One of his boys, Dwight Davis, went on to break 4 minutes in the mile in college.  During one period in the late 90's he had half a dozen girls running at Division 1 schools, one a two-time Footlocker finalist, Amanda Pape.

The hatred eventually put Mike in a bind.  It was impacting his recruiting at Johnson County Community College.  He hated the back biting lies and jealousy that his success brought.  By 2001 he washed his hands of private coaching and slowly but surely the hate and resentment among the high school coaches in the Kansas City area faded away.

The best group of his long, line of successful distances runners came out of a group which dubbed itself, Delta Force.  Amy Gouchner, Elle Pishney and Amy Hastings were all outstanding high school runners.  All ended up at D1 schools, Gouchner first running for Mike at JCCC, then Southern Utah.  Pishney went to Duke.  Hastings was an All-American at Arizona State.  Now she's an Olympian.

I went a long for a long run or two with this trio in the late 90's.  They loved running together.  You could see the bond gained from those16 mile runs they rolled through every Sunday morning.  But I can honestly say that I would never expect that any of these three would become world class distance runners.  Yet, Hastings did. 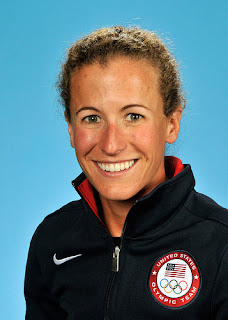 Amy was in no way the best runner Mike ever coached.  Pape was the most accomplished at the high school level with a national junior title at 5000 meters.  Amanda was good in college (Georgetown), but lacked Hastings drive.  Amy thrived at Arizona State and by her junior year she started running quality times and earned multiple All-American honors.  Then last year she ran a stunning 2:27 debut marathon in Los Angeles opening a lot of eyes.

A heart breaking 4th place finish at the Olympic Trials Marathon in Houston left her with only one option.  Amy had to qualify for the Olympics in the 10000.  She did it shocking everyone by out sprinting the field for an unbelievable win.

Tomorrow Amy will toe the line against the world's best.  That means facing the Kenyans, Ethiopians, Russians, Chinese and Brits in hopes of Olympic glory.  It would be a miracle on the scale of Billy Mills epic win in Tokyo for Hastings to even make the medals.  A top 10 finish would be a stellar achievement.

Tomorrow when I sit down at 4:25 p.m. to watch this race I will think of Mike and all the garbage he swallowed to help get Hastings to where she is today.  He played an important role in developing a young, talented runner, into a world class competitor.  I know he's proud.  He should be proud.