Sunrise 2 Sunset: Into the Fire

Running is one of my passions.  I've done it for 42 years.  One of my running bucket list items included participating in a relay race.  This weekend I got my chance to check that one off.  I took part in the Sunrise 2 Sunset Relay.  9 of us, 2 guys, 7 gals, with 1 very patient driver, would traverse 180 miles from Fort Myers, Florida to Jensen Beach, Florida. 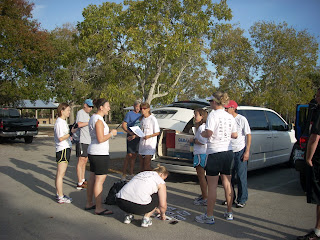 The race would send teams off in sets of 3 every hour beginning at 8 a.m.  More than 30 teams would participate.  We were set to leave Lakes Park at 9 a.m.  I had no idea what to expect, except that I probably wouldn't get any sleep.  I barely knew any of my teammates except for Mike Pemberton, who coaches and owns a local running shop. 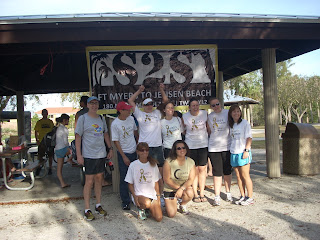 The team was called Caleb's Crusader, in honor of a very brave 4-year-old, who lost an impossibly tough battle against a very rare form of cancer, 5 years ago.  His mother Monique was a team member and his aunt Dana was responsible for putting the team together, our captain if you will.  Caleb's Crusade is a real-life charity that raises money for childhood cancer research.

The race went off and we traveled in a mini-van and a Jeep to begin what would become something of a great adventure.  I won't name, names but the level of ability broke down this way.  Four of us (myself included) were pretty good runners.  The other 5 had plenty of heart and ranged from 10 to 11 minute pace types to 14 to 15 minute per mile runners.

After the first leg we were dead last.  The weather wasn't going to cooperate.  It was getting plenty hot but fortunately we weren't getting a full dose of Southwest Florida humidity.  On the third leg Maria, a tough ultra-runner, starting catching teams in front of us and as the heat came on full blast Mike ran a stellar 6 miles and reeling in more runners.  Jami, a nurse, a mother of twin boys and ultra-runner, continued to pound out miles in very difficult conditions and I thought... hmmm... we're not doing too bad.

But in the full heat of the afternoon our other runners faced difficult conditions and walk breaks were the only way for them to survive their 5 and 6 mile stints.  I ran the 8th leg of the race taking the tag just outside of Alva, Florida 10 minutes at 2:14 p.m.  It was plenty hot and next to no shade.  There were no other teams in sight and I sailed out to a 7:30 first mile and did a very slow fade over the next 2.5 miles.  I averaged 7:45 over my 3.5 mile leg and knew we were in for a long afternoon.

Dana endured more of the spring sizzle before handing off to Maria for her second leg.  Maria and Mike had jogged part of the earlier legs with some of the other girls to help encourage them through the heat.  Maria was feeling it as she approached LaBelle so I jumped out to join her just after 5 p.m. running with her over the last mile of her leg.  I blocked the blast furnace of a wind as we made it to the exchange point.  Maria handed off to Jen but kept running to keep her company and to get in some extra miles.  Maria was using the race in preparation for an upcoming 100 mile ultra-run this May, so she wanted to get in a lot of miles.

It was at that exchange that I noticed some other teams beginning to catch us.  Jen was having a rough time.  It was her second leg in the heat and her first 3.5 mile run about 5 hours before had left her fried.  She was trashed when she finished the 4 miles and some teams had passed her.  She was wiped out, possibly on the verge of heat stroke, vomiting and in a world of hurt.

The sun was setting and the girls were slugging out the miles.  The heat had taken its toll and while Jamie had caught at least 1 of the teams that had passed us, it was setting up to be a very long night.  I had a long wait before setting out on the 18th leg of the relay.  Mike would hand off to me just outside of the Moore Haven, Florida, which sits along massive Lake Okeechobee.  It was pitch black when I took off on 9:46 p.m.

We had started using a bicycle to accompany the runners in the dark as a recommended safety measure.  Dana rode along with me on the bike as I cranked out a 7:45 mile.  My right hamstring was yapping at me.  I was really worried that it would give out before I finished.  I faced a big climb, at about 1.5 miles, a bridge spanning a canal that allows boats to pass from Florida's east and west coasts.  I attacked the bridge and Dana was peddling for all she was worth to stay up with me.  The night air felt great but coming down off the bridge I felt the blast of wind.  I managed to average 7:50 per mile as I finished up another 3.5 mile leg and handed off to Maria as she set off on yet another leg.

I knew as I climbed back into the mini-van that Jen wouldn't be able to run her leg, #21 which was coming up in a couple of hours.  I decided I could run it and still have enough time to rest up for my next leg, which would come in the early morning hours.  I had done a good job on my leg because Maria was now reeling in other teams that I had closed the gap on during my run.

We hit an old fishing village just before midnight where Maria handed off to Andrea, who was developing some nasty blisters.  Our two vehicles stopped at the old village to take a collective breather.  I took advantage of a shower and washed off as a green frog watched from the shower stall wall.  I changed into some clean clothes when Jamie approached me saying she would run Jen's leg.  I waved her off and told her I had it.  Jami is one tough cookie.  It was setting up to be a long, sleepless night.
Posted by Rink's Ramblings at 1:58 PM