Return of the Czarina

The prime road racing season is nearly at an end in Southwest Florida.  For much of it, the Czarina has been laying low.  She did give it a go at a 10K last December but that's been it.

Her complaints have been numerous.  The Czarina can't breathe, she's too fat, her legs are too tired, you get the idea.  I didn't push her.  I could tell she was struggling getting into what she deemed reasonable shape.  Her post-marathon foot problems from 2010 had left her short on training.  But about a month ago I could see that was beginning to come around.

So when I went to register on Friday for Saturday's 5K I signed her up.  The Czarina couldn't figure out why there were two race bibs in the goody bag when she got home from work and then it quickly dawned on her the evil that I had wrought.  The Czarina complained good-naturedly but I could tell deep down inside she wanted to give it a go.

Normally by mid-April the humidity has set in but we were greeted by 70 degree weather and just a hint of humidity when we arrived at a church where the race was to start.  I was hoping to crack 22 minutes and I think the Czarina was just hoping to run 9 minute miles.

The gun went off and I tried to hold myself back.  I had raced out too quickly at the last 5K but much to my surprise I hit the mile in 7:03.  I felt good but I could tell I was going into a slow fade.  I didn't feel fresh and had no snap in my stride.

I saw the Czarina about 100 yards past the turnaround and she yelled encouragement to me which told me she wasn't hurting too bad.  I yelled back and worked to try and reel a trio of runners about 20 yards ahead of me.  My legs were dead with a half mile to go and when I saw the clock from about a half block away I knew I wasn't anywhere close to the time I wanted and eased my way to the finish in 22:22.

Once across the line and went back to look for the Czarina.  When she's in good shape she's only 3 minutes behind me.  Today she was less than 5 minutes behind me running under 9 minute miles and when all was said and done she had won her age group in 26:56.  I had finished 2nd in mine.  The Czarina was pretty pleased with herself and when all is said and done I think this will inspire her to do more racing next winter.  She quickly pointed out when we got home that her sex/age graded time was better than mine.  I inadvertently showed what I thought of that in this picture. 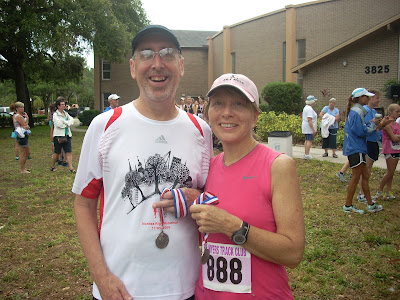 Posted by Rink's Ramblings at 6:00 PM