Back to the Circle 4 Ranch

So after the disaster in Omaha I reached for a lifeline and one of my all-time favorite people John Broholm handed one to me.  Professor JB got me into KU's grad school pronto and I was back home in Lawrence, living with my wonderful mother, getting plenty of much needed TLC and grabbing onto college life with both hands.

Besides school I quickly landed a job at KLWN radio.  In fact it was almost identical to the job I had held during my senior year in college where I worked the Sunday morning shift.  Right off the bat during one of those early Sunday shifts we had a severe weather outbreak and I diligently delivered the information in a professional matter.  It prompted long-time operations manager Bob Newton to pay me a compliment which was one I will always carry with me.  I had come a long way in the 17 years since graduating.  In fact during the next big storm they called me in to man the board and help lead the coverage which was strong praise from this radio station which loves chasing tornadoes. 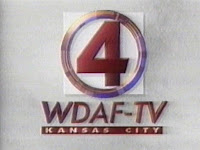 But it seems television wasn't finished with me.  My mentor and old boss at WDAF, Mike McDonald, reached out to me in early April asking if I wanted to help out on weekends part-time.  Weekend EP Michelle Heslop was taking maternity leave and I was asked to fill in.  I reluctantly said yes because after my confidence killing stint in Nebraska, my heart wasn't in it.

I think it was during my second weekend, Dave Helling, one of the great journalists to ever grace Kansas City, looked at me quizzically and asked me what was wrong.  I looked at him and said, "Because they got rid of me in Omaha for doing what I'm doing now."  Dave laughed and pointed out to me I was doing exactly what I was supposed to be doing and to forget about Omaha.  It was exactly what I needed to hear.

I served my three month stint as the fill in and actually ended up producing a few newscasts along the way.  Just as school was set to resume in late summer Assistant News Director Henry Chu asked me if I wanted a full time job producing the 9 p.m. news.  I jumped at it and not long after I had earned the position of Executive Producer.  I was back working with people I love like Phil Witt, Frank Boal, Al Wallace, John Holt, Mike Lewis, J.W. Edwards, Tommie Sifuentes and Fritz Kramer.  Plus I made a ton of new friends who had joined the staff in the four years that I had been away from FOX 4.

It was an exciting time as FOX was growing it's news brand.  Along the way FOX actually bought the station which helped immensely.  It was an exciting time to be back in Kansas City as the Chiefs were playing great football, the political battles in the city involved major stakes such as saving Union Station but most importantly I was back with friends and family.

But things were going to get tough and by the end of 1998 a lot of changes were coming to my life both personally and professionally.  I was going to have to make some difficult decisions about where I wanted to take my life.  And unfortunately, I think I made a poor choice which haunts me to this day.
Posted by Rink's Ramblings at 6:34 PM