Sunrise 2 Sunset: Into the Light

The sun came up at a snail's pace on the eastern edge of Lake Okeechobee on March 31st.  As the clock edged past 7 a.m. we waited at the edge of a massive overpass under construction that stretched across a canal next to the lake.  As Maria rounded the bend and handed off to Jamie we watched in amazement.  She was surprisingly full of run and reeled in one of the men in front of her.

Suddenly it was Mike's turn again.  He had enjoyed scant rest with just three legs coming before his next run.  The lack of sleep and his early morning romp took its toll as about halfway through his 6 mile leg he simply ran out of gas.  He was visibly angry as one relay team pulled up to him and slowly rolled away from him.

As Mike's meltdown unfolded we enjoyed a moment of levity.  We were parked near a big field with three or four other team vans.  Just as our other vehicle pulled in we watched a man, probably in his 30's, give the girls the Full Monty.  Howls and hoots immediately erupted.  The guy didn't care and the conversation that ensued will not be disclosed to protect the guilty.

The going got tough as the morning sun climbed and with it, the temperatures.  About 25 miles from the finish we found our mini-van parked outside the world famous Payson Horse Farm.  Much to my relief nature came calling and I summoned my courage to walk up to the front office to ask if I could use their facilities.  To my amazement the elderly gentleman welcomed me in and I enjoyed one of the great bowel movements of my life.

Once that mission was accomplished it was a long waiting game as I was slotted to run 6 miles that featured 2 major overpasses.  It was grueling work for the girls.  Maria and Mike were in and out of the vehicles to run and walk with them to encourage them on.  Mike was sipping on small bottles of white wine between his quick jaunts.  During one of his time outs he spotted a comely young lass doing jumping jacks in a jog bra before her relay leg.  I think he wanted to follow her in the mini-van and Jen dubbed the girl Treasure Chest.

As our road weary women ran their final legs we watched in frustration as several teams cheated, cutting legs short with early exchanges or substituting runners illegally.  It was frustrating but given the blistering heat it was not hard to understand.  We were doing everything we could to run this relay by the book.

Shortly before noon I took the relay wrap which fit neatly around my wrist for my final leg and headed out under partly cloudy skies.  Mike had given me 2 Hammer Race Caps and boy did it help.  Much to my surprise my legs were fresh.  I went out gently at just under 9 minutes easing my way over a bridge.  Suddenly I was reeling off miles at 8:30 pace.  But by mile 4 I was tiring and another bridge loomed.  As I began the climb I was hit by a cool quartering wind at my back and the clouds hid the beating sun.

As I started my last mile in the distance I spied a red shirt.  It was the first time in the entire relay that I had seen a competing team and my pace quickened.  Slowly but surely I cut what was probably a 800 yard deficit down to about 300 yards in that single mile.  I climbed into the back of the mini-van and began to sweat profusely.  I couldn't believe how drenched I was but knew that in another 3 hours it would all be over.

There were 3 more legs for the girls to run and 3 more big bridges to traverse but we finally landed on Jensen Beach.  Jen was recovered enough from her Friday blow-up to attempt the last leg.  Jami decided to make the trip with her for moral support.  That last 4.24 miles seemed unending but at last Jen, Jami with Andrea helping out, came into sight and the team gathered for the final run into the finish together. 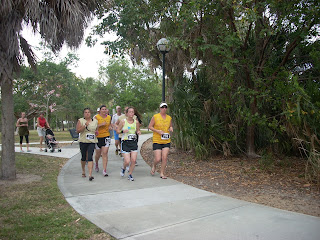 I found myself almost giddy at the finish line.  I hadn't slept in more than 32 hours but I felt blessed to have witnessed something amazing.  A group of experienced runners had learned some memorable lessons from a group of novice runners.  I learned that if you take on the tough challenges with a smile and a sense of humor the improbable can become possible.

I watched proud women do things they probably thought impossible a few years ago.  They ran and biked dozens of miles while keeping the atmosphere as festive as a rock concert.  The 180 journey was a most excellent adventure full of fun, life lessons and fabulous new friends. 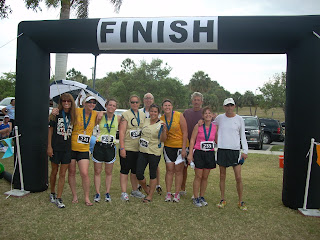 Posted by Rink's Ramblings at 7:01 PM