Life in South Florida means coping with humidity.  You get three to four months of relief from December to the end of March.  Sometimes you don't even make it through March.  But this Spring has been exceptional.  We've enjoyed incredibly dry conditions.  The weather has been down right delightful. 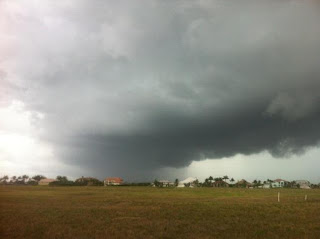 That is until today.  Today started out warm, almost hot.  Slowly but surely this week the temperatures have been rising but the lack of humidity has been shocking.  But then this afternoon the clouds began to build and by 4 p.m. the sound of thunder could be heard rumbling in the distance.

I was inside when I heard the deluge hit.  The poor Czarina was outside finishing up her yard work.  She escaped only semi-soaked.  It rained real hard as it always seems to do when it does rain here, but it only last for about 15 minutes.

By the time I decided to head out the door for a run the rain was down to a mere drizzle and boy was it humid at 5 p.m.  I went for a 6 mile run while the Czarina settled for 5.  About 2 miles in or so the sun decided to make an appearance making it a double whammy of heat and humidity.

The run provided a reminder of what outdoor exercise will bring over the next six months.  It's going to be hot, nasty and humid.  Running won't be much fun.  By about July I'll be looking forward to a nice tropical storm to bring down the temperatures.
Posted by Rink's Ramblings at 7:01 PM