Quick Trip to the Land of Czars 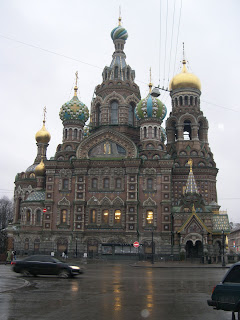 The job search went on hold about three weeks ago.  I received an invitation to visit St. Petersburg, Russia in October.  I'm going to visit with Russian journalists to speak about the changing landscape of local American television news.

This will mark my third visit since 2008 to St. Petersburg.  The picture on the left was taken during my first visit during Russia's Christmas season.  It was an incredible experience.  It was my first trip overseas and a first class experience all the way around.

The second trip came about 15 months after the first.  I made even more friends and became even more familiar with everyday life in Russia living in an neighborhood apartment, learning to navigate my way around the city without getting too lost.  Unfortunately I didn't do the kind of sightseeing I did on the first trip.

This time around I plan to make better use of my free time.  I want to make it to Peterhof which is just outside the city.  I also want to take another walk through The Hermitage.  There's so much to see in this one-time palace that it's overwhelming.

I've even started taking Russian classes.  It's ridiculous that it's taken me this long to make a real effort at learning the language.  It is a ridiculously difficult language to learn.  Sometimes I feel like my head is going to explode.  But I'm enjoying the challenge.  It's like puzzle solving taken to the nth degree.

Sadly my Russian will be sorely lacking when I step off the plane in three weeks.  But I'm hoping that with a lot of studying in the next few months I might be able to actually hold a short conversation with The Czarina.  Now that would be something!
Posted by Rink's Ramblings at 6:04 PM