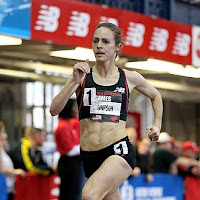 Two days remain of World Championship Track and Field and unless something mind-boggling happens, Jenny is the story of the meet for the good old USA.  That's Jenny Simpson to the uninitiated.

Simpson had shown a great deal of promise more than 3 years ago establishing herself as a world class steeplechaser and a damn fine 1500 meter runner.  Last year with her epic college career at Colorado over, she changed coaches, got married and disappeared.  Injuries ended her season causing a lot of people to write her off.

A slow start to this season kicked off by a bout with flu created even more doubters.  Many wondered why she had abandoned the steeple, the event she set an American Record in back in 2008.  Thursday silenced her critics taking America's first 1500 meter gold in 28 years.  The only bummer from that race came when another favorite, Morgan Uceny of the United States, took a tumble 550 meters from the finish in a bit of racing bad luck not of her making.  Otherwise I think we would have seen two Americans on the podium.

The excitement of Simpson's epic win roused me from bed early this morning so I could watch the women's 5000 live this morning.  I was hoping against hope that Lauren Fleshman could steal a medal or at the very least take a top 5 finish.  Plus there was Amy Hastings, the Leavenworth High grad who was making her World Championship debut.

The race went about as I expected with a pack of Kenyans and Ethopians ratcheting up the pace with 600 meters to go.  Hastings had disappeared from the pack early on but Fleshman was hanging on for dear life.  Within 150 meters the pack pulled away from Lauren who fought bravely all the way to the finish to grab a respectable 7th place. 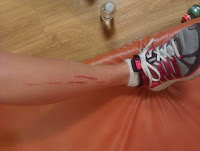 For those of you who don't realize that track and field is a contact sport check out Fleshman's leg following her qualifying heat.  The pushing and shoving in both the men and women's races this year have been brutal.  Uceny's fall is one of a half dozen I've seen in just one week of racing.

The IAAF needs to look at thinning out the fields.  15 plus runners are way too many to stick out on a track.  The grabbing, pushing, shoving and spiking makes for pathetic racing.

Editor's note:  I strongly urge you to read Lauren's blog she posted about her experience leading up and running in the finals.  It's a fabulous read.

Posted by Rink's Ramblings at 9:39 AM