It took three months but the Czarina got on an evening flight last Friday from Fort Myers and paid me a weekend visit in Sacramento.  The poor girl was tuckered out by her cross country journey but that didn't stop her from devouring a bag of potato chips when she got to my apartment.  She also managed a quick critique of my housekeeping, which while negligent, was better than she expected.

We enjoyed a morning run along the American River Trail.  The Czarina was thrilled at getting in a run without feeling like she was in a sauna.  She wanted to see the surrounding countryside so I took her to Auburn and we made a stop at Ikeda, a tourist favorite for burgers, fresh fruits and pies.  She picked up a bag of dried banana chips while I inquired about a good place to go for a hike.  The Czarina wanted to make a trip into the wilderness by foot so we were directed to a trail about four miles outside of town. 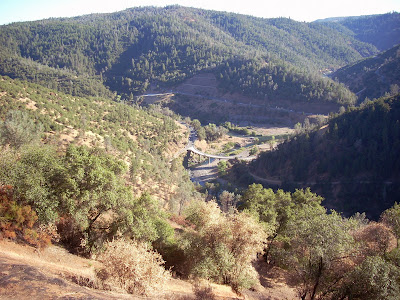 The fun started as we headed out Forrest Hills Road and across a very high bridge that spans a branch of the American River.  Even though we were traveling on a very wide and nice two lane blacktop the Czarina was in full freak out mode.  By the time we had crossed the bridge and made it to the turn off for the trail she was demanding that we leave.  I proceeded to creep my Ford Escape down a windy blacktop toward the trail and her demands only intensified.  The drop offs were pretty frightening but it wasn't anything to get too riled about.


I finally found a spot to pull off and we took a gander at the beautiful valley.  It was breath taking and she wanted pictures but she refused to drive down to the bottom of the canyon where the rivers converge.  She did insist on stopping at the bridge for another scenic view and then it was off to her favorite destination of the entire trip, the Thunder Valley Casino. 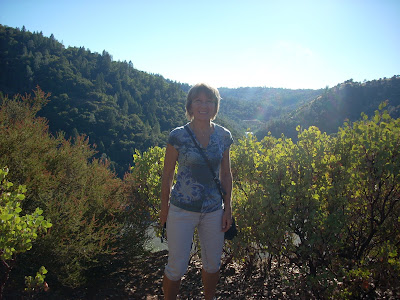 The scary trip must have done something to her appetite because at the buffet she went through three plates of food including two steaks and two trips to the dessert bar.  The Czarina can eat but her performance at Thunder Valley was amazing.  We got in a good three hours of gambling and called it a night and headed home where we watched the worst movie about running ever made called "Running."

Sunday's highlights included a 14 mile long run around massive Land Park and a trip to the station.  She finally got a chance to see where I worked.  We also toured some of the neighborhoods in East Sacramento, Fair Oaks, and Carmichael.  We even went as far east as the dam at Folsom Lake which was pretty cool to see.

Sadly, our visit ended Monday morning as I had to drive her to the airport and head into work to produce the 5 p.m. news.  The Czarina had a good time and agreed that Sacramento was a pretty cool place. Hopefully this will put some umpf in her job search.  Our next rendezvous is just three weeks away when we hook up in Las Vegas for our marathon adventure in St. George!
Posted by Rink's Ramblings at 10:48 PM