It never fails when I land a new job.  Something terrible seems to happen sometime within the first year on the job.  During my first tour as an intern at KMBC it was the Coates House Fire that killed 20 people.  In Minneapolis it was the riots at the Red Lake Indian Reservation.  When I hit Little Rock a Titan II missile exploded killing some airmen.  Back to Kansas City and while it took a little longer than usual the Hyatt Crown Center sky walk collapse killed more than 100 people.  When I got to Phoenix a flight passenger jet bound for the Valley from Detroit crashed on takeoff killing a lot of people from the area.  You get the idea. 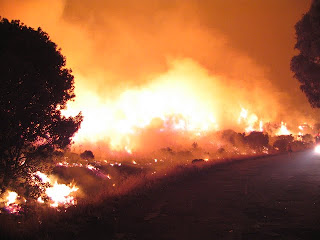 Tonight a huge natural gas line exploded in the San Francisco suburb of San Bruno.  It's one of the few communities in the Bay Area that I am somewhat familiar with.  I used to date a woman who lived there.  The destruction is beyond believe.  Block after block of homes were consumed by the fire.  So far the death toll is only one, but I suspect there may be victims we don't know about at this moment.

Technically this disaster didn't happen in the Sacramento coverage area but it's less than a two hour drive from our newsroom to where it all happened.  I'm proud of the way our reporters, photographers, and producers responded tonight.  Our assignment editor did yeoman's work tweeting and putting updates on Facebook throughout the night while coordinating directions with the crew.  It made for a 13 hour day but that's nothing to the monster hours I've pulled during hurricane coverage.  Here's hoping that we don't have more excitement like tonight for a very long time.