11 months I blogged about my sense of loss of friendship.  I can count on one hand people who were friends that were near and dear to my heart but as time passed those friendships have slipped away.  One of my favorite friends reminded me quite gently in a comment that it's a part of the ebb and flow of what life brings us.

Sunday night I had an opportunity to renew a very old friendship.  One that stretches back to grade school.  I first remember Gary when I was in the second grade but we didn't become best buds for about two more years.  He was a little intimidating at first but then I think we discovered a mutual sense of mischievousness when it came to teachers, girls, and the social strata in general that comes in elementary school.  We spent a lot of time together and got into as much trouble as two kids growing up in a small town could get into without actually breaking the law.

The 6th grade was the best.  We had a great teacher Milton Pippenger who later went on to become an outstanding superintendent of schools in Kansas.  Mr. Pippenger fanned the flames of what would become my life's work, journalism. 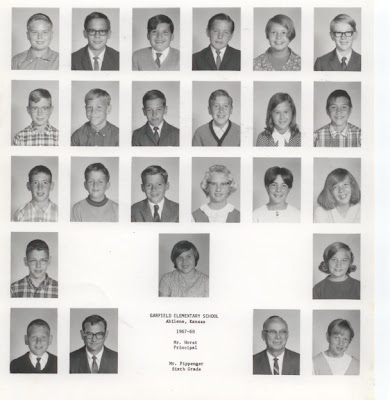 But Gary moved to Kansas City just before the start of the 7th grade and my life was somewhat adrift.  It took awhile for me to find my compass and it came in the form of another friendship.  But that's for another blog.  Gary and I remained friends but time and distance did its damage.

As fate or irony would have it we both ended up in Lawrence attending the same high school, but we never reformed the bond that we had shared in Abilene.  We had different friends and different interests, but through all the years we always kept track of each other.  The gulf that had grown was finally bridged in 1994 when I went to Boston to run the marathon and Gary offered to let me stay at his house.  My life, at the time, was in a shambles.  I never let on to Gary about my personal undoings but seeing him, reliving our "greatest hits," gave me a sense of renewal and revisiting the past helped me move forward with my life.

The latest twist in our enduring friendship came during my drive from Florida to California.  I don't why Gary decided to call me as I sat in a Amarillo steak house but he did and the glee in his voice was unmistakable when I told him that I was moving to Sacramento.  Gary had failed to mention in the occasional emails that we traded that he was slowly but surely moving to Sausalito while running his business in Boston.

Tonight we met up in a small restaurant in the East Bay to catch up.  Gary remains an anchor and a touchstone for my life.  Every time we get together he reminds me of when I was a snot-nosed gawky kid and gives me a glimpse of how far I've come in my life.  That's a good thing.  We may not terrorize the Bay Area the way we dreamed of terrorizing Abilene but we both still dream and that is a good thing indeed.
Posted by Rink's Ramblings at 10:18 PM