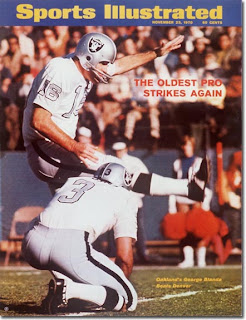 My mom got me a subscription to Sports Illustrated for Christmas in 1967.  It only fueled my love of sports.  I would glean through the pages reading about my heroes and living legends in baseball, football, basketball, hockey, golf and of course track and field.

George Blanda was one of those legends.  His five game run of saving the Raiders in 1970 was something to behold.  He did it kicking and he did it playing quarterback.  Mind you, he was 43 years old at the time.  Back then most NFL quarterbacks never made it to their mid-30's much less 43.

As a fan of the Kansas City Chiefs I hated the Raiders.  But I deeply admired George Blanda.  He was a survivor and an incredible athlete.  He played in the toughest league in the toughest game on the planet until age 46.

As our heroes pass away one by one it reminds us of our own mortality.  Many of my great sporting heroes like Sandy Koufax, Willie Mays, Bobby Orr, Kareem Abdul-Jabbar, Jim Ryun, Billie Jean King, Jack Nicklaus and Billy Mills.  This just a small slice of the men and women who I admire for their athletic accomplishments.  Blanda, even though he was a hated Raider, was just one of them.
Posted by Rink's Ramblings at 9:59 PM