The moment I heard about Tiger Woods's holiday mishap I knew something was amiss.  A highly controlled professional athlete with a sparkling resume doesn't get into a motor vehicle accident in the wee morning hours over a holiday without something weird surrounding the circumstances.  My instincts told me he was hustling out of his house because he had gotten into a fight with his wife.  I had seen the reports earlier in the week about his rumored fling in Australia.  30 plus years in television news covering crap like this may not make me a rocket scientist but I figured in the next couple of days Tiger would step in front of the cameras and put out this smoldering fire that was burning at the edges of his highly polished image. 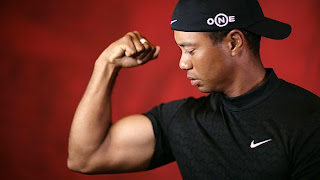 Wrong!  Instead of getting in front of the story Tiger and his handlers offered up lame news releases.  Granted, he probably didn't want to face the cameras especially if his wife had gashed his face with one of his golf clubs.  But stepping in front of the cameras and candidly discussing his marital problems and asking for time to mend his marriage would have gone a long way in slowing down this PR disaster.  Instead Tiger suffered a the death of a thousand cuts.  By

refusing to get out in front of the tabloids and even the
traditional media the story bubbled and grew into a two week nightmare filled with bimbo eruptions and sponsorship defections.
While the major papers and television outlets have let the story fade away the tabloids continue to dig and dig and dig.  Tiger only fueled the frenzy by going underground and then by announcing his decision to step away from golf.  Now nearly three months into Tiger's sexcapades the golfing great has finally decided to sit down and talk to reporters.  But this decision is yet another glimpse into the PR lunacy that has surrounded this whole affair, excuse the pun.
On Friday Tiger will sit down with a group of handpicked reporter and read a prepared statement, at this moment word is that there will be no questions allowed.  Woods is apparently hell bent on destroying his credibility completely.  No, he doesn't owe journalists or his fans for that matter anything.  But by refusing to step up and open up he only invites unending scrutiny, not just from the paparazzi and tabloids but also from the mainstream media.
What all this tells me is that Tiger Woods has arrogance that knows no bounds.  Like a lot of superstars Tiger has surrounded himself with sycophants who lack the courage to tell him what he needs to hear.  Tiger Woods may pass Jack Nicklaus as the golfer with the most major championships, but for this sports fan, he will never replace the Golden Bear as the greatest golfer of all time.  For this sports fan, class counts.
Posted by Rink's Ramblings at 7:41 PM