I felt a little guilty as I put on a long sleeve shirt and blue jeans to mow the yard this afternoon.  Normally I do it in a t-shirt and shorts but it was a bit brisk outside.  Of course as I fired up the mower I couldn't help but chuckle about my poor friends in the Midwest and the horrible winter they've been forced to endure this year.

As I made my way through the yard I noticed that part of a dead Bottlebrush Tree had fallen off.  Now the Czarina, who loves nothing more than killing all manner of plants, including trees, had been on me to rid our yard of this dying tree.  She's killed or ripped out more trees and bushes than I can remember.  I won't even going into her epic vine rampage in the summer of 1999 back in Kansas City.  It was during that backyard assault that I watched in amazement as the Czarina covered in dirt, sweating like a leaky bucket growled her unforgettable retort, "Now you know why Russians won the war!"

I had tried the chainsaw but it didn't do much to the extremely hard wood.  So with the dead branch lying on the ground it dawned on me a little muscle might do the trick.  But after a lot of snapping and breaking one branch refused to budge.  So attempted to use my biggest asset. 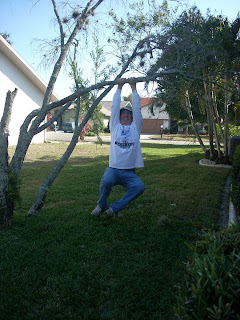 Even with my massive girth the branch didn't want to give way.  I had already managed to snap off considerable chunks of the tree up to this point.  The Czarina even joined in the fun. 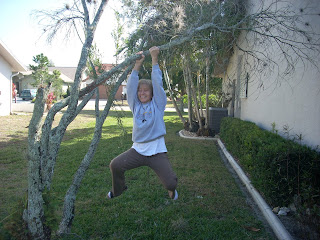 Unfortunately the camera could not catch the moment when the two of us decided to suspend ourselves
the offending limb.  It gave way with a mighty crack and we tumbled to the ground giggling all the while. 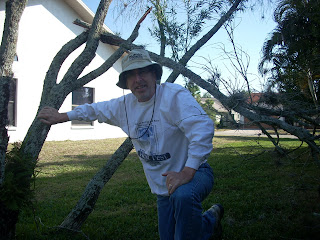 I posed before the shattered branch like a proud hunter lording over his prey.  About two thirds of the tree remains behind.  Part of me just wants to douse it in gasoline and set it on fire, but I don't think the neighbors would approve.
Posted by Rink's Ramblings at 7:48 PM