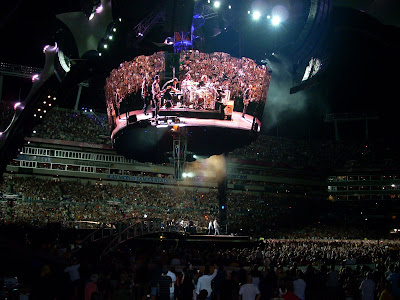 U2 was as staggeringly hot as the temperatures that greeted them at Tampa's Raymond James Stadium Friday night. The 360 Tour marked my first blast fro 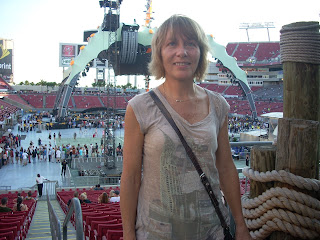 m the Dublin boys since 1997's less than stellar Pop Tour. I wanted to experience the band which I think is the second greatest act ever one last time in all their stadium excess and glory. Plus for the Czarina, it was her first experience at a stadium rock concert.

Don't get me wrong, 360 can't touch 1992's epic Zoo TV which was the greatest rock and roll show I ever saw. But the stage craft and the music in Tampa came damn close. The sound was incredible. U2 has put its money into making sure that the fans get the best quality sound. The massive video screen that hung over the stage was amazing. It moved and warped its way through the concert to fit the music. 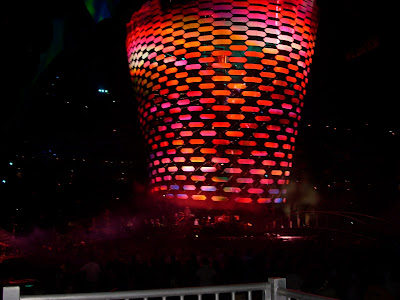 The only negative were the tickets. I'm a fan club member and got to select my seats early. I thought that I had purchased sea 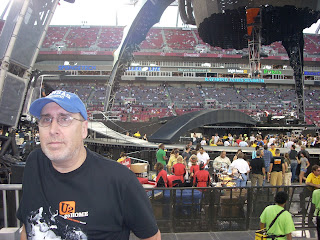 ts that would have put me dead even with the front of the stage. Unfortunately I was a good 20 to 30 yards behind The Edge. The circular stage did allow the band to work the entire stage but for 250 dollars a pop I expected much better. Plus I was seated right next to the pit entrance so foot traffic was a constant irritation.

For me, the set list was just about perfect. I heard "Stuck in a Moment,"Magnificent,"Until the End of the World," and a tear welling "Walk On." Ending the show with "Moment of Surrender" seemed a bit odd. For a band now in its 30th year of existence the last three albums are staggeringly great and "No Line on the Horizon" is on a par with their legendary works "Achtung Baby" and "The Joshua Tree." 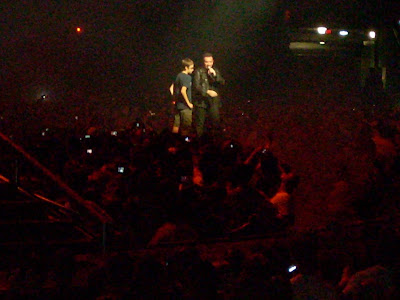 Above is Bono being Bono. He pulled a young boy out of the crowd and paraded him around the stage and then handed him his iconic sunglasses. The thrill of a lifetime to be sure. The heat was easily 95 degrees on the floor of the stadium at the start of the show. Poor Bono was constantly taking sips from his water bottle. 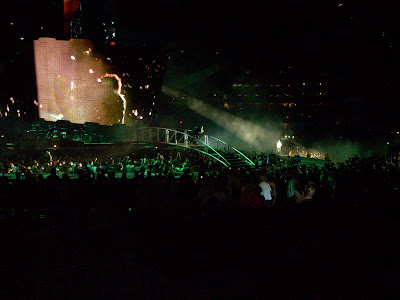 The place was packed. They said more people were there for this show than the Super Bowl but the crowd was amazingly well behaved despite the distractions I had to deal with.
To my friends who read this blog I say this, go! Spend the money and see this band. I love music and while no one can touch "The Beatles," these guys come damn close. They've stayed relevant, something the Rolling Stones haven't done. To me U2 is the second greatest rock and roll band ever. Sorry Stones and Zeppelin fans but even with all of Bono's annoying pomposity, the music stands the test. 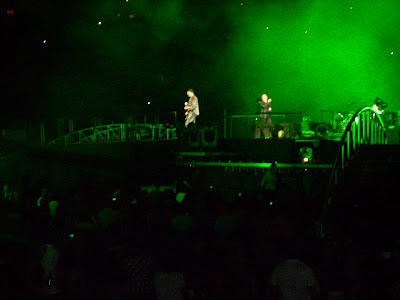 Posted by Rink's Ramblings at 9:46 AM