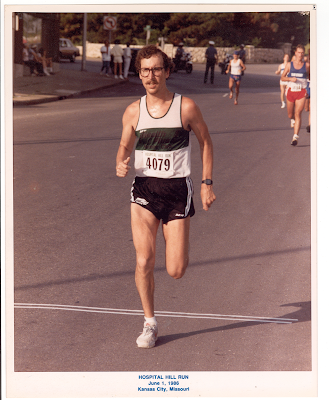 1985 was a pivotal year in my life. I was turning 30 and my running was going nowhere. Two races I distinctly remember that spring were a half hearted attempt at the Kansas City Marathon. The last 12 miles were a death march and I ran something in the 3:11 range. Later in June I ran an 8K in Eugene, Oregon that went a little better, just breaking 30 minutes. That told me I could still run reasonably fast.

It took a couple of high school runners, Tom Spencer and Matt Blake to open my eyes up. I was helping coach the cross country team at Rockhurst High School. Tom and Matt were the best runners on the team. They did their own thing, which included fewer intervals and a lot more mileage. They swore by it and convinced me that I needed to meet their private coach, Tom Dowling.

A couple of weeks before my 30th birthday I made an appointment and met with Dowling. He asked me what my goals were. It was pretty simple. I wanted to break 10 minutes for two miles and break 2:40 in the marathon. Tom's enthusiasm about the task at hand was off putting. He explained the approach that he wanted me to take, which meant building a base. Tom said that sometime by late next spring he expected me to be able to run a 21 mile long run. I just about fell over. There was no way in hell I could run that far as a training run. He just smiled and started putting together a six month training calendar and told me that I had to start keeping a running log, something I had done only haphazardly in the past.

The calendar had me going from 20 miles a week up to 60 plus over the course of six months. It was nothing but miles, no intervals (unheard of for me) with the occasional 10K time trial. I was ready, willing, and able and I committed myself to the program. Within six months I had reached the magical 21 mile long run. It was a life changing experience.

Every Sunday morning anywhere from a dozen to 30 people would gather outside a health club in a Kansas City suburb to run 18 to 25 miles. Some days it could be a who's who of top flight area runners including an occasional Joe Falcon sighting, a sub 3:50 miler in his prime. There was a camaraderie that I had never experienced before or since. I had new friends that shared the joys and the agony of rolling through the hills of Leawood and southern Overland Park. I had a quirky coach with an infectious personality who was not only determined to make me a better runner but a better person. I began to realize that I was capable of doing some things that had seemed unimaginable to me just a few months before.

Agonizing 10 mile runs now felt like easy 3 milers. By the fall of 1986 I wanted to try a marathon with my new found conditioning. Coach Dowling forbade me to race, I was to run seven minute pace on Kansas City's difficult marathon course. The weather was perfect and I found myself cruising along effortlessly at 6:30 pace. Dowling was standing at me screaming at me to slow down. I threw my hands up and continued along.

After cresting the monstrous hill in front of Research Medical Center I again saw Tom at the ten mile mark which I hit in about 65 minutes. Half warning, half laughing he yelled, "If you keep going at this pace you'll run 2:45, slow down!" I felt great and kept chugging along.

It wasn't until about 21 miles I could feel that the wheels were beginning to come off. I forged on thinking that maybe, just maybe I could run under 2:50. I was tiring and to compound matters the last mile back into Swope Park was a grueling uphill section. I pushed and pushed and made it to the finish nearly off my feet. Tom held me up almost giddy with excitement. I had run 2:49:34 on an extremely challenging course. I had chopped almost eight minutes off my best marathon that I had run in college off of 20 miles a week training. I was a confirmed believer in the Lydiard approach to training and the concept of long, slow, distance. A 2:40 marathon didn't seem to be an unrealistic goal.
Posted by Rink's Ramblings at 6:56 AM