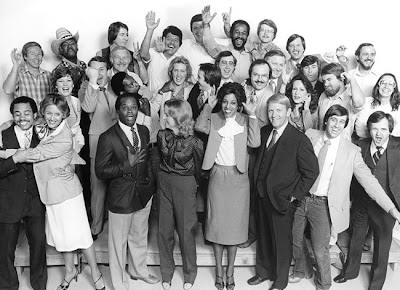 If you look hard, really hard, you'll spot me in the midst of this gregarious group of Action 4 News journalists. I remember this day well. We had climbed to the mountain top of Kansas City's TV ratings. WDAF had been a well beaten #3 when I arrived at Signal Hill in the fall of 1980. The folks you see in this picture pulled off the impossible, minus the man who led us there, Mike McDonald. I don't know why Mike isn't in this photo, but he had the vision and built the team that put us on top.

Out of the 30 people in the picture only four remain employees of WDAF as it celebrates its 60th year today. I spent 12 years of my life there working there three different times. McDonald could never get enough of me. The only survivors at FOX 4 are Fritz Kramer in the back row standing next to the indomitable Marty Blackmore in the hat. The other two that are left are standing next to each other in the back row, Jim Monteleone, the man next to him the beard J.W. Edwards and Mike Lewis in the glasses.

Two of these folks went on to big things. Del Walters, in the front row on the left side, went on to anchor in Washington D.C. and has made a name for himself writing about Black America. And if you're blind you will miss Gayle King standing in the front row, dead center. There's nothing wrong with being Oprah's best friend.

Standing around me, to my right is Jan Smith, a wonderful journalist who is married to Sam Donaldson. In front of me looking back at Jan is Bruce Lindsey, a crazy ex-Marine who kept me constantly entertained, next to Bruce is Dennis McCullough, a man way too smart to stay in television, and to my left is the late Glen Hanson, who did just about every job imagineable in the business. The only other person in this picture that I know has died is Sue Parcell, she was a classmate of mine at K.U. and a dear friend, she's standing in front of Marty with a big smile. Sue's been gone 21 years now.

I see the joy in all of those faces and my full head of hair and I can't believe how far life has taken us all. It was the golden age of television news... before computers and satellites made it easier for the bean counters to kill the business and before uninformed, undereducated, anchor wanna-be's populated newsrooms across this country.
Posted by Rink's Ramblings at 12:03 PM