Fall is in the air, at least in Kansas. It certainly wasn't Saturday morning at the cross country meet I covered for the News-Press. You could see the moisture rising from the fields as I drove to the meet at 7:30 a.m. I felt sorry for the kids running in the hot, muggy conditions this morning. 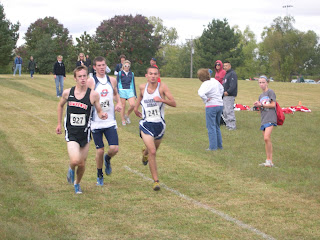 Seaman Invitational 2009
It was a completely different scene a week ago just north of Topeka where I enjoyed watching one of the best high school distance runners the state of Kansas has to offer. His name is Roy Wedge. I'm hoping he can join a relatively short list of Lawrence Lions to win an individual state cross country championship. Roy's already done something that Lawrence High greats Kent McDonald, David Johnston, and Chris Williams could never do. Young Mr. Wedge led his team to the school's first ever team title last year ending a double digit run of state championships by Kansas 6A powerhouse Shawnee Mission Northwest. 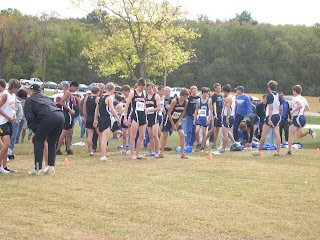 Lions ready to hunt
Roy took second last year as a junior. His sophomore year he was a remarkable 7th. But his skills reach far beyond cross country and track. Roy's just as tough in the classroom where he's a National Merit Semi-finalist. He was recently named the LHS Homecoming King and according to his dad he's a pretty tough chess player. Heck Roy's even got a Facebook fan club! 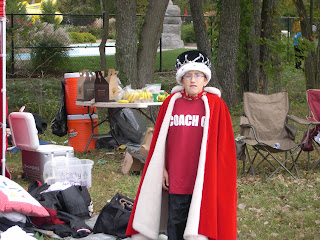 I saw Roy win the Seaman Invitational while visiting Kansas last week. It was great to see his dad, Phil, a teammate at Lawrence High and a great friend through high school and college and still to this day. Roy won of course quite handily. 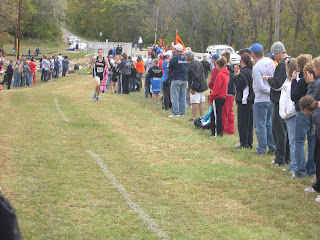 In the homestretch to victory 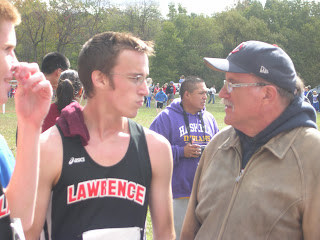 Roy and the Excitable Dad
The excitable dad called me Saturday afternoon with news of Roy's latest triumph. He ran a blistering 15:47 in horrible conditions at the notoriously tough Shawnee Mission Park course. I was sleep deprived when he called because of the U2 concert the night before and the early morning cross country meet so I couldn't quite share Phil's enthusiasm for this impressive effort. So here's to Roy Wedge and his wonderful band of Lion teammates as they make another run at a second straight state title. The icing on the cake would be a gold medal for this remarkable young man at Rim Rock in three weeks. If Roy does it, he will join Johnston and Williams as the only Lions to win individual honors. As for McDonald, he may not have won a state title, but he has the pleasure of helping coach Roy and the rest of the boys. Go Lions! 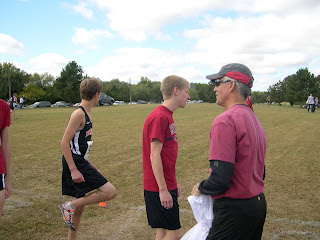