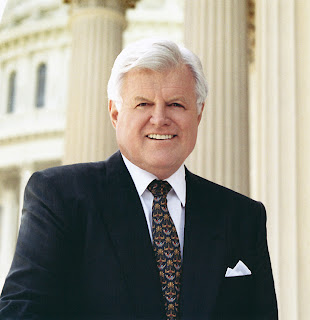 I'm a little sad today. The passing of Senator Edward Kennedy also marks the passing of an era of American politics in which civility and common sense still mattered. It marks a time before the bombast of Rush Limbaugh, Sean Hannity, and Glen Beck or the shrill protests of Keith Olbermann or Alan Colmes. Politics was the art of compromise and Kennedy represented the best of that.

I actually voted for him in the 1980 Presidential primary in Arkansas. I had registered as a Democrat for the first time in my life. This was before the Republican Party had re-emerged in the post Civil War South. I couldn't vote for Jimmy Carter because he was an ineffectual fool and voted for Ted Kennedy.

In 1984 I was a field producer at the Democratic National Convention in San Francisco for WDAF TV. This convention actually had some drama as Colorado Senator Gary Hart was taking former Vice President Walter Mondale to the mats for the nomination. Mondale won in a contencious fight.

We had a skybox inside the hall for the convention and I was lucky enough to be in there to watch Ted Kennedy deliver a stem winder of a speech to pull the party back together. It was like watching a rock star hold sway over an audience His ability to deliver a speech was captivating. I count my lucky stars that I actually witnessed history.

As we all know Senator Kennedy was a deeply flawed man. So were his brothers. But all were great men nevertheless. The torch is passed.
Posted by Rink's Ramblings at 6:17 AM