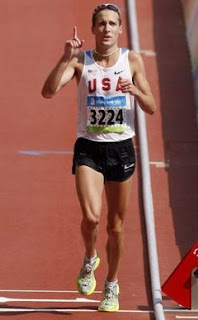 He gave up college running after his junior year in Boulder and turned professional. Injuries had plagued him at Colorado and continued to bother him off and on as he progressed toward a fine career, but one that never captured the promise that he had shown in high school. Ritz as he is known, was good, but not great.

He finished a respectable ninth in the marathon at the 2008 Olympics. But after a disappointing marathon in London this year he decided it was time to move on to his third coach in five years. This time he joined Alberto Salazar in Oregon. Salazar had built Galen Rupp into a 10000 meter terror and coached Kara Goucher to a World Championship bronze medal and world class marathoner.

The new coach quickly made his mark. Ritzenheim surprised everyone in the 10000 meter World Championships two weeks ago in Berlin beating Rupp and finishing an impressive 6th place in a major personal best of 27:22.26.

The icing to the comeback cake came tonight in Zurich where Ritz trailed field and the mighty Kenenisa Bekele by as much as 50 meters in a lightning fast 5000 meter race. Ritz made an incredible charge over the last 1000 meters to run a staggering 12:56.27 to finish third and in the process take down Bob Kennedy's long standing American record.