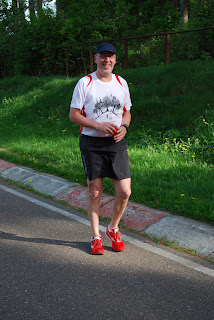 As the search for gainful employment grinds forward I am taking advantage of the "extra" time I have to do something that I haven't done in about 15 years... run doubles. The last time I ran twice a day I was in the same situation, except a lot younger. I had no job and was in the midst of a search that would take three months to bear any fruit. So I went batshit crazy and piled on the miles.

I went from running about 40 miles a week to 80 to 100 in the course of one month. In fact the month of May 1994 remains my highest mileage month ever at 383 miles. I ran every day, usually seven to ten in the morning, and another similar amount of mileage at night.

By the end of May I was in killer shape. I was in the midst of proving it during a 10K in Kansas City when I felt a twinge in my left calf that within a mile became a full on pull. I battled leg injuries for the next four months. It was a never ending battle with my calves and hamstrings that I've never really recovered from to this day.

I'm not aiming for 100 mile weeks. The idea is to jog an easy two to three miles every morning and do my normal four to six in the evenings. I'll stick with single runs on the weekends. With any luck I'll get in 40 to 50 miles a week. More importantly I'll drop another ten pounds.

Losing weight will be the key to any fantasies I may have about running a marathon. I haven't run one since 2002 when I clocked my slowest ever in Tucson with a 3:16. Right now I'd be happy to scrape under four hours. But with a few more miles, a few more long runs, and a few fewer pounds and I think I can get back under 3:30. The key will be whether those cranky calves and hamstrings can stand the stress. Stay tuned.
Posted by Rink's Ramblings at 2:04 PM