I give up. Usain Bolt is insane. He demolished a very good field (it would have been great if Gay had run) at the World Championships today. I've got to believe that with a little work he could take down Michael Johnson's 400 meter record.

But forgive me because the bumper crop of medals by the Jamaican sprinter leaves me very suspicious. The women have scored three crushing victories in the 100, 100 hurdles and the 400 hurdles. Of course there's Bolt, but I really want to believe he's just a freak of nature. Two of the women gold medalists are both sporting braces on their teeth. That's a sure tip off to the use of HGH.

It's not sour grapes. The American women have run just okay so far in the sprints save for Sonya Richards in the 400 who struck a much deserved gold. Here's hop 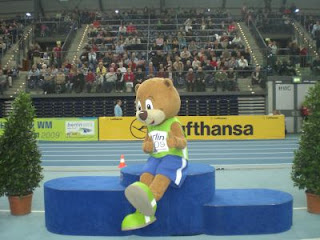 ing that Allyson Felix can redeem the U.S. in the 200 meter final tomorrow night.

The meet has been nothing short of smashing so far. The competition has simply rocked. I even like the big goofy bear mascot that has managed to get itself involved in all manner of celebration with the winners.

Again, I highly recommend Universals streaming of the meet. It beats the television coverage by a mile. And the best is yet to come with this weekends marathons!
Posted by Rink's Ramblings at 1:51 PM