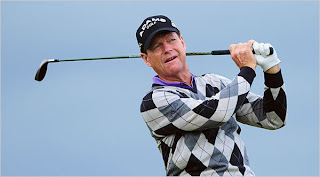 Tom Watson is leading the British Open. It's been nearly a generation since this golfing great has been in contention on the final day of a major championship. And yet, his hometown newspaper won't spend the money to send a reporter to Scotland to cover this historic effort.

Watson is one of the great sporting heroes of Kansas City. He's one of the big three along with Royal's Hall of Fame 3rd baseman George Brett and Chief's Hall of Fame quarterback Len Dawson. The late Joe McGuff, the legendary Kansas City sports columnist is probably spinning in his grave right now. The very newspaper he used to manage, the Kansas City Star, refuses to bite the bullet and send one of its own reporters to provide the hometown touch to this momentous event.

The Star like a lot of newspapers is owned by a company that is bleeding money. Many of its top line sports reporters have been shown the door over the last year. It probably would have cost them over ten thousand dollars to send someone on Saturday to cover Sunday's final round.

As I told the Czarina earlier today Watson winning the Open would be akin to Bill Rodgers winning the Boston Marathon. Watson is 59 years old. A victory would make him the oldest winner of one of golf's major championships by more than a decade.

Shame on the Kansas City Star. The people of this city have had very little cheer about when it comes to its sports scene over the last decade. This once great paper is missing out on the biggest sports story for the community George Brett's induction into baseball's Hall of Fame. Oh yeah, they did send a couple of reporters to cover that.
Posted by Rink's Ramblings at 7:54 PM