No, not those Jayhawks, I want to express my appreciation for the band called The Jayhawks. If you haven't given them a listen then I strongly suggest you take the time to do so. Their first album in 1992, "Hollywood Town Hall," is an indy rock classic.

Back then the band featured the amazing harmonies and songwriting talents of Gary Louris and Mark Olson. The sound is country tinged rock. Unfortunately they never put out a lot of music and in 1997 Olson decided to go his own way. 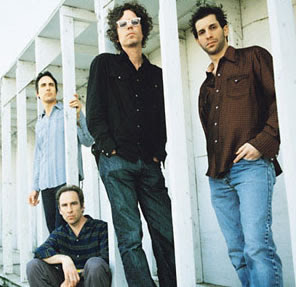 The reconstituted lineup in my estimation was better. Louris was free to lead the group into a more rock based groove. The Jayhawk's last two albums, "Smile" in 2000 and "Rainy Day Music" in 2003 are staggeringly good. But nobody seemed to notice.

David Letterman liked them enough to have them on his program a few times. My take is that their sound never fit into a nitch. They weren't country and they weren't rock, they were alternative country-rock. The music they made is simply beautiful. I guess I'm writing about it because they've released an anthology this month called "Music from the North Country." You see despite the name, the band is from Minneapolis. Give them a listen, you won't be disappointed.
Posted by Rink's Ramblings at 5:48 PM