A nice surprise came in the mail from one Steve Riley, masters runner extraordinaire and a dedicated Bob Dylan fan. It was a DVD of Dylan's "Hard Rain" concert that aired on NBC 23 years ago. The disc is a Japanese dub of the show because it's got Japanese writing plastered all over the broadcast, karaoke if you will. 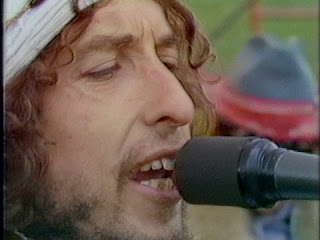 The concert was taped in a driving rainstorm in Boulder, Colorado. I remember watching the show live and helping my friend and former high school teacher Tony Gauthier commandeer a reel-to-reel video recorder from the high school to tape the event. If my memory serves me well even outgoing Lawrence school superintendent Randy Weseman (then a student teacher) was on hand for the after hours bootlegging. I have no idea what happened to the tape.

"Hard Rain" was a stop during Dylan's epic Rolling Thunder Review. The year before Steve had invited me to travel with him to Massachusetts to see Dylan and company at the start of this classic tour. My mother forbade it so I stayed at home while Steve had an experience that will last a lifetime.

A few years earlier Steve sent me a grainy VHS copy of the Dylan concert that was originally supposed to air instead of "Hard Rain." The performance had been taped in Tampa and called "Black Rain" by fans. "Hard Rain" is good but "Black Rain" is a great performance. The only reasons I can speculate as to why this didn't make it to general release was the extremely dark lighting and the fact that Joan Baez absolutely stole the show.

Oh where have you gone my blue eyed son?
Posted by Rink's Ramblings at 10:52 AM