Running in Southwest Florida comes with a few challenges. You've got to deal with heat and humidity for about half the year. Certain times of the year bugs become a big problem, especially if you choose to run around dusk. It can turn into an insect buffet at times. Also there's the wildlife, namely snakes and alligators that sometimes like to sidle up next to the trail.

The biggest challenge is lightning. Our rainy season starts at the beginning of June and last until November. Weather patterns become predictable and sometimes that means morning storms or at other times, afternoon storms. A pattern started last Tuesday where big thunderstorms start building up inland in the late afternoon. 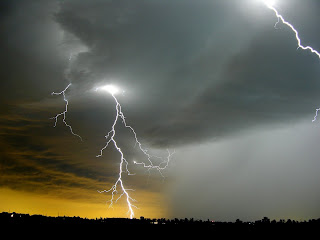 It can be a blessing and a curse requiring an ability to read the local radar in order to avoid getting caught in lightning. Tuesday I got out the door just as the storm rained itself out and got in a terrific 6 mile run. I just managed to beat the return of the sun which created a sauna.

Wednesday the Czarina and I headed out the door for a four mile effort as a storm built to the east. I started us out running through our development with an eye to the sky. Just before two miles the sky lit up with lightning to the east and we were back at the house in under two minutes.

Thursday the storms were collapsing just to the north of our home. The Czarina refused to head outside but I could tell it was dying out. I managed to get in a wonderful 7 mile run with refreshing breezes from the dying storms downdrafts. Just so you don't think that the Mrs. ducked a run, she did head out about a half hour later.

Today it was the same story with the storms building up again in the east, but much farther inland. It was a little more humid but it made for a 4 mile pleasant run. Running is such a bear during our summers these storms come as a welcome relief despite the dangers. But as any runner can testify, nothing's more terrifying than getting caught a good two miles from home in the middle of a lightning storm.
Posted by Rink's Ramblings at 3:43 PM