The Czarina Steps In

I put this off for as long as I could.  I had trained long and hard for the Naples Daily News Half Marathon.  But somewhere in the early weeks of January my left calf started bothering me again.  I listened to it and shut it down for 10 days and tried to run a couple of days before the race to see how it felt.  It wasn't bad but I knew it wouldn't hold up for 13.1 miles.

Still, I asked the Czarina to pick up my race packet so I could get my t-shirt.  She came home with it and announced that she would take my bib and run the race.  I chuckled.  The Czarina had injured her calf back in November in a soccer scrum with the grand kids.  Her running was shelved for more than two months.  She refused to take any of my advice to use the roller and ice it.

That meant the Czarina was constantly re-injuring her calf every time she attempted to run.  As fate would have it about the time I shut it down in mid-January she ran 3 miles without any pain.  Just to make sure she put in a 6 mile run to see how she felt.  So, the Czarina was running the half marathon with about 20 miles under her built over the course of the last 75 days.

I feared she would injure herself again but telling the Czarina not to do something is like telling the bull to stay out of the china shop.  She was determined to wreck havoc on her body.  She even took my bib which had my first name on it and covered it with her name.  Nothing was going to stop her. 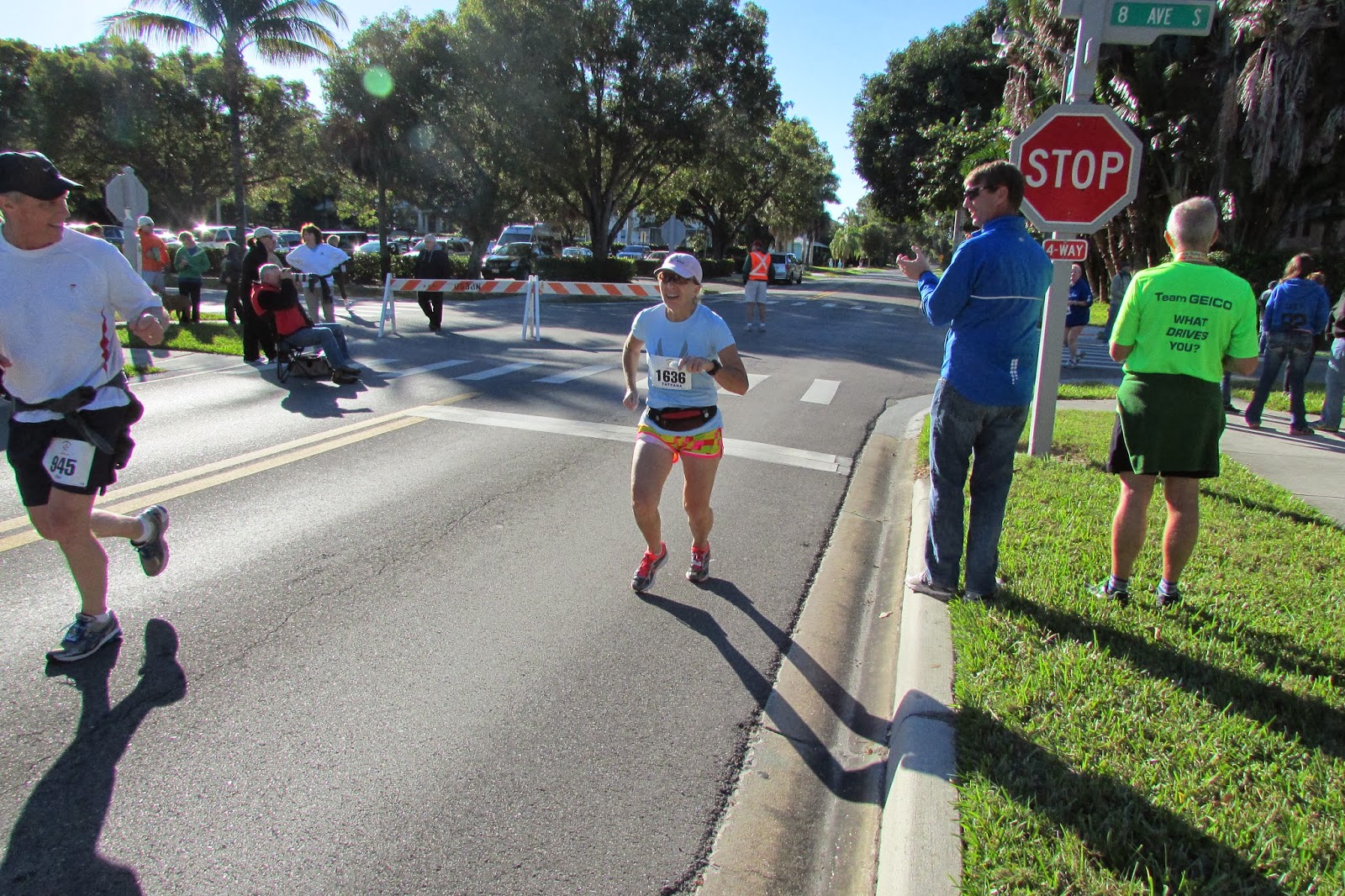 I got up and went out with her that Sunday morning.  The weather was about as perfect as you could want for a long race.  It was just a touch about 40 degrees at 7 a.m. with no wind and no humidity.  I went for breakfast while she ran through the ritziest neighborhoods that Naples has to offer.  I went back to the course about 10 minutes after the first Kenyan had crossed the finish line.  I walked down the course with a camera in hand to see if I could catch her coming in, hoping against hope it wasn't going to end in a 3 hour walk.

The Czarina came chugging along not long after the 2 hour mark.  She was moving very fast but she wasn't limping and was pretty pleased with herself.  She ran 2:15 which is a good 25 minutes slower than her best effort.  And yes, she could barely walk for the next two days and has continuously complained that I should give her my race shirt.  Fat chance!

As for my running, the calf started feeling great this week.  I've stopped biking and the elliptical and started with some short jogs.  I even got a MRI because of the never ending hip pain.  A couple of my lower discs in my back are bulging, but not much, at least not enough to do anything about it.  So it's back to running and hopefully I can rebound for a decent March 5K before the heat sets in.  At least the Czarina is running again and maybe, just maybe, will do a little more racing.
Posted by Rink's Ramblings at 5:24 PM