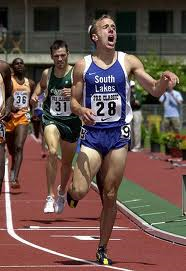 What a week plus for the sport of track and field in the United States.  Mary Cain and Galen Rupp are off on a record setting tear.  But I can't help but believe none of this would be happening were it not for a tremendous trio of runners that set the high school scene on fire at the start of the 21st century.  Alan Webb, Dathan Ritzenheim and Ryan Hall made all of what we're seeing now on the American distance running scene possible.

Now news surfaced this week that Alan Webb is stepping away from the track, leaving behind a career that saw incredible highs, but oh so many heartbreaking lows.  Webb is going to become a triathlete, not a far-fetched idea given the fact that he was a top flight swimmer before he turned to track.

Webb broke Jim Ryun's legendary high school record in the mile in 2001, shattering a record that had stood for 36 years.  He followed that with an American record for the mile in 2007.  But for all the success, he never could harness his potential on the championship stage.  His range was stunning.  Webb ran a sub 1:44 800 and 27:34 for 10000 meters.  Only Olympic gold medalist Said Aouita of Morocco ever showed that kind of range.

Least we forget Ritzenheim has made two Olympic teams as a marathoner and is one of only 4 Americans to break 13 minutes for 5000 meters.  Hall became a sensational marathoner after college setting an American record for the half marathon along the way.

As good as these three runners were as professionals, all three could never reach the brass ring.  Webb's career was a roller coaster.  Ritzenheim could never avoid the injury bug, costing him some of his prime years as he fought time after time to come back.  Hall was much like Webb.  He couldn't decide on a coach and made the worst mistake any runner can make when he decided to coach himself.

And now we have a stable of great American distance runners from the 800 to the 10000.  Galen Rupp is just one of a whole range of men from Matt Centrowitz to Nick Symmonds who can boast championship medals.  Rupp took down the American 2 mile record Saturday night to go with the 5000 record he took the week before.

The same night Rupp broke the 5K mark Cain set a world junior mark for 1000 meters.  Then Friday night she came with a tenth of a second of the world junior record for the mile running 4:24.11  Even with those stunning marks this high school sensation must play second fiddle to Jenny Simpson who can claim two championship medals.

Hold on tight, we're in for a wild indoor season.
Posted by Rink's Ramblings at 5:32 PM