I find it difficult to let new music into my life.  I'm very stubborn that way.  A few bands and artist creep into my musical vocabulary but it only happens every five years or so.  I know that it leaves me limited and stunted in my tastes, but so be it.  It's self-protective because I tend to buy everything in sight when I discover something new.  It saves me financially. 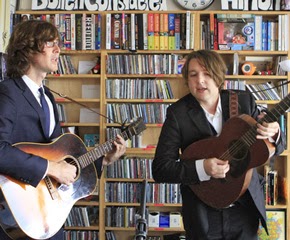 That brings me to The Milk Carton Kids.  They appeared magically in a documentary airing on Showtime called "Another Time/Another Day."  T Bone Burnett created it as a homage to the Coen Brothers movie, "Inside Llewyn Davis."  The Milk Carton Kids give a breathe taking performance of a song called "New York."  They sound like a 21st century version of Simon and Garfunkel but with a dash of Smothers Brothers.

You can catch a full flavor of their banter and repertoire on this week's Austin City Limits.  Kenneth Pattengale and Joey Ryan form this duo out of California.  It's a folk based act with soaring harmonies and some tenacious picking by Pattengale.  Ryan is a jokster and it causes one to flash back to what a young Bob Dylan must have served up in the way of story telling back at The Gaslight.

They are fan friendly.  If you check out their website you can download their music for free.  Check out their performance on Austin City Limits which features a short chuckle filled interview with the duo.  I promise, they won't disappoint.
Posted by Rink's Ramblings at 9:00 AM