I just finished reading Graham Nash's new autobiography, "Wild Tales," when word comes about the death of Phil Everly.  There is irony in that awful news.  Nash cites the meeting of Phil and Don Everly as the turning point in his young musical career.  Nash and Alan Clarke, who would help create The Hollies, went to see the incredible harmonizing duo in 1960.  The two waited after the show outside the hotel where the brothers were staying. 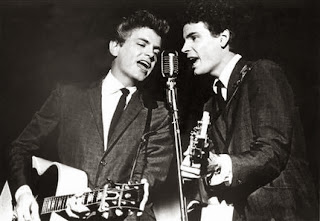 Phil and Don were coming home late from some serious drinking when they encountered the future British pop stars waiting for them outside of their Manchester hotel.  Instead of brushing them off, the brothers patiently answered Graham and Alan's questions for several minutes.  Nash says the lasting impression from that meeting was the Everly's advice to never give up in their pursuit of their dream to have a career in music.

The Everly Brothers filled a gaping hole in the American music scene while Elvis was away in the Army.  Their influence on the sound of rock and roll stretches all the way from British invasion bands like The Beatles and The Hollies, but even to great American bands like The Byrds, The Eagles and of course, Crosby, Still, Nash and Young.

My personal Everly favorite is "All I Have to do Is Dream."  But their hit making run, while prodigious, was relative short, stalled out by the British Invasion that they had helped inspire.  They rightly went into the first class of the Rock and Roll Hall of Fame.

Not to be lost in this rambling is Nash's book.  It is an excellent read.  I've always like Graham Nash.  He's always been open and available to the media.  He has championed many important, progressive causes.  He opens a lot of old wounds, especially in exploring the complex dynamics of CSN&Y.

As I wrote before after reading Neil Young's autobiography last year, Nash leaves no doubt that Neil is a major league asshole.  It hurts me to write this.  I love Neil's music so much, but his selfishness and ruthlessness is just as great as his talents as a guitar player, songwriter and singer.  For Nash, it's the music that keeps him juggling with the combustible dynamite that is Neil Young.  It's worth the read, it's nearly as great as the music Graham Nash helped make.
Posted by Rink's Ramblings at 9:11 PM