Birth of the Cool

I miss him already and he hasn't even left.  I'm talking about a player that truly is the only basketball virtuoso I've seen in a Kansas uniform.  I'm talking about Andrew Wiggins.  His ability to glide effortlessly to the basket, with a repitorie of spins, slams and silky smooth jumpers, it takes my breathe away.  Chamberlain and Manning are the greatest of the greats, but I have never seen a freshman the like of Andrew Wiggins.

Danny Manning was a freak of nature.  He was a big man who could handle the basketball, a maker of a myriad of shots and a terrific rebounder.  As a freshman, Manning was surrounded by a stellar group of upper classman who he quite openly deferred to.

Wilt Chamberlain could not play as a freshman.  That in and of itself is a tragedy.  Have no doubt that if he could have, Kansas would have contended for a national championship that year.

The only freshman that comes close to Wiggins is a player who really came to the fore in the NBA.  Paul Pierce showed glimpses of what was to come.  But unlike Wiggins, Pierce wasn't a great defensive player as a freshman.  Pierce also lacked the ability to put the ball on the floor and make stunning drives to the rim.  The defense is really what seperates Wiggins.  He's relentless on the defensive end of the floor. 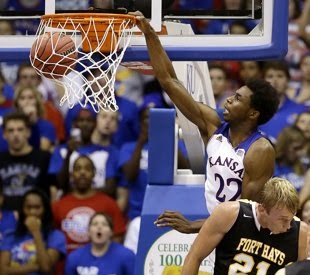 Watching Wiggins dismantle Kansas State on Saturday with the help of another freshman sensation Wayne Selden caused me to reflect back on the time when freshman were given eligibility in the middle of the 1973-74 season.  Kansas had a manchild of a freshman sitting on the bench, Nino Samuels.

I had the good fortune of seeing Samuels play his senior year for Salina Central at the state basketball tournament.  Samuels was a man playing among boys as he dismantled a tough McPherson team.  He had skills that left Kansas fans drooling.  Unfortunately as good as Nino was at driving and slashing to the basket, he was bad at hitting an open jump shot from 15 feet, a must in the college game if you want to keep a defender honest.

40 years of freshman eligibility has taken us from Nino Samuels to the NBA ready Andrew Wiggins.  What I wouldn't give to see Wiggins stick around another year to watch him cement his legend.  I'm going to enjoy the ride while I can.
Posted by Rink's Ramblings at 9:00 AM