I can’t remember the last time I went an entire year without running at least one race.  In fact, I’d be willing to bet that I’ve run at least one race every year since 1971 when I started running track at South Junior High.  I’ve had a couple of years where I ran only one or two races but I’ve always managed to sneak one in regardless of my conditioning.
The last time I laced up my racing shoes was a year ago.  I ran a leg for a relay team at the California International Marathon.  I wasn’t in the best of shape then having been beaten up from the St. George Marathon which dampened my enthusiasm for training.  Despite my poor condition and 8 miles of rolling hills I managed to help my team to a victory.
With only four weeks of racing left I figured it was time to give it a go and a popular 10K this weekend seemed as good a time as any.  I had no idea where my fitness level stood.  Since moving back from California I had enjoyed five months of decent training.  Problem is out of those 800 or so miles of training less than a dozen of those miles clocked in under 8 minute per mile pace.  I had serious doubts as to whether I could even break 50 minutes for a 10K.
The Czarina who had shown an absolute lack of interest in racing helped seal the deal by deciding to join me in getting up at the crack of dawn to give it a go.  90 percent of the races around here are pancake flat.  This race traverses two of the bridges that span the Caloosahatchee River which meant we’d actually have to run up a couple of major hills.  Given my sketchy hip I had no idea how it or my right hamstring would react to the hills.
The gun went off at 8 a.m. and I decided to keep an eye on one particular runner in my age group who I always beat but is never very far behind me.  The year before he had run around 48 minutes so I figured it would be best to start out behind him and pace myself off of his effort.  He opened up about 30 yards on me in the first quarter mile but by 1 mile I was just 10 feet behind him rolling along at an easy feeling 7:30 pace. 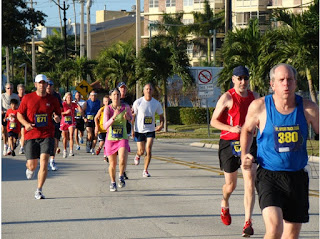 Before we headed up the first bridge I scooted on by him and decided to concentrate on reeling in runners while making sure I stayed within my comfort zone.  Over the next 5 miles I caught 30 or so runners.  Two caught and passed me but one I reeled in over the last quarter mile. 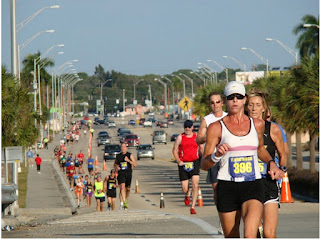 More importantly I ran an even pace throughout the entire race and even caught one of the top women masters competitors who I had never beaten before.  When all was said and done I hit the finish line in 46:45, a good minute or so faster than I thought I could run.  I feel one spot short of an age group award but I was a good 90 seconds behind him. 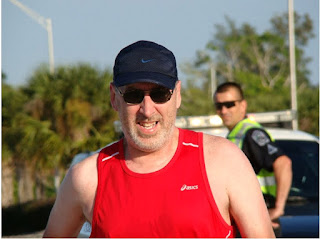 The Czarina came rolling in more than 10 minutes later looking no worse for wear.  Surprisingly she didn’t earn an age group award.  One of her rivals beat her to the finish line by a mere 30 yards but the Czarina was in good spirits just the same.  It was her first race since St. George, more than 14 months ago. So we’ve got one under the belt and a whole winter and spring of racing ahead.
Posted by Rink's Ramblings at 1:24 PM