With my birthday approaching it seemed that some fun was in order.  I pondered running in a Sunday marathon in Cape Coral but the thought of spending two or three days in complete misery wasn't all that appealing.  Then an email landed in my in box mid-week reminding me that Rain was playing at the Barbara B. Mann Performing Arts Hall on Saturday. 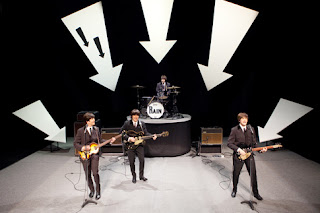 I figured it would be fun for the Czarina so I decided to surprise her with a night of Beatles music.  We had seen Strawberry Fields, another Beatles tribute band, in New York City three years ago.  She enjoyed that show but then again the Czarina loves live music of almost any kind.

The show brought back a flood of memories.  I can remember the Fab Four's first performance on The Ed Sullivan Show.  I was glued to the TV for each and everyone of their appearances.  I also remember their performance of "Hey Jude" on the Smothers Brothers Show.

That song in particular brings back a flood of memories.  I can remember driving with my cousin Mike Hendon in the late summer of 1968.  We were in his Mustang heading out to another cousin's farm.  Mike was babbling along about the newest Beatles single "Hey Jude" when just outside of the tiny town of Enterprise it appeared as if by magic on the radio.  You have to understand hearing Beatles music over the radio in North Central Kansas was a rarity to begin with because the airwaves were dominated by country.  This stunning seven minute plus song was mind blowing.

Sitting in the concert hall hearing that song along with more than 90 minutes of magic caused my mind to drift to my family and the role this music had played in my life.  For the Czarina some of what we heard wasn't familiar to her.  Growing up in the Soviet Union she didn't hear much Beatles music until the band had already broken up.  It was the forbidden fruit that she would come across on the radio as she searched out foreign radio stations which could blast through the Soviet efforts to block the signals.

It was a great way to spend a Saturday night.  Plus it was a hell of a lot less painful than running a marathon.  The show was almost as good as Beatlemania which I saw almost 30 years ago in Kansas City's Uptown Theater.  But then again it's hard to go wrong with a night of Beatles music.
Posted by Rink's Ramblings at 5:48 PM