The Black Hole That Is Thomas Robinson 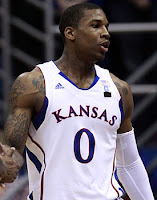 Thomas Robinson is a great basketball player.  However, if he continues to play the way he is playing Kansas will lose a half dozen games or more before we even hit March Madness.  When he gets frustrated he saunters back on defense.  It's happened more times than I care to count this season.  On offense when the ball goes into the low post to him it disappears.  Time and again he misses the opportunity to hit the wing man for the three.  He's an incredibly selfish player.

It made me think back to another player who was the centerpiece of a Kansas team that lacked depth and complimentary players who could score.  I had to go back 40 years.  What I'm seeing this season reminds me a lot of another Kansas junior with All-American credentials.

The 1969-70 Jayhawks featured a slick shooting left hander from Illinois who could rebound all night long.  Dave Robisch reminds me a lot of Thomas Robinson.  Robisch was a better outside shooter but Robinson is a much more dominating interior player.  Robisch had ungodly stats his junior year.  He averaged more than 25 points a game and double digits in rebounds.  But that Kansas team was mediocre.  Part of it I think was because Robisch was selfish player.  Part of it was the lack of maturity on that team, a lot like this year's version of the Jayhawks.

Ironically in his senior year Robisch shot less and got a lot more support from his teammates.  Other than the addition of couple of pretty decent sophomores, big man Randy Canfield and long range bomber Mark Williams, Robisch had the same supporting cast.  But Bud Stallworth became a dynamic shooting small forward and center Roger Brown made major strides offensively.  That team went to the Final 4 losing only one game during until they ran into UCLA in the semi-finals.  Robisch went on to enjoy a long NBA career.

The best part of tonight's USC game was when Bill Self sat Robinson for about four minutes after he jogged down court letting his man slip free for an easy layup at the other end.  I'd rather watch Kevin Young flail around and hustle than watch T-Rob pout.  Granted, Robinson's endured more than any college junior should have to suffer with the loss of his mother and grandmother in the last year, but it's time for him to grow up on the court.
Posted by Rink's Ramblings at 9:24 PM