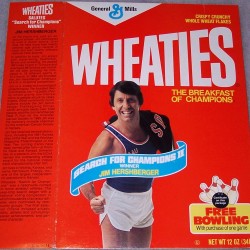 If you ever met Jim Hershberger, you'd never forget it.  Though small in stature, he was larger than life with an ability to take over a room through his sheer force of personality.  James Wayne Hershberger passed away a few days ago, ironically, not far from where I live now.  He was 80 years old.

I first met Jim Hershberger in 1971.  Everyone in Kansas knew who Jim Hershberger was.  He was an oil millionaire who loved track and field.  Hershberger loved to compete and was a great age group runner before the term was even invented.

I was at my first 10 mile road race with my friend Greg Morgenson.  It was in the tiny western Kansas town of LaCrosse.  It was a simple out and back affair with maybe 50 to 75 runners present.  There were no t-shirts, there were no age group awards and if you weren't in the top 10 you were out of the medals.  I remember seeing someone wearing track spikes clacking along the asphalt road, insanity I thought.  Most of the race was on a gravel road so the idiot in spikes probably didn't suffer too much but I remember the heat and struggling back the last four miles.

I finished somewhere near the top 10 in about 65 minutes but out of the medals.  Not long after I crossed the finish line I was approached by one Jim Hershberger who offered me a bit of sound advice.  He told me to stop running on my toes.  I had spent the previous winter learning to run on my toes at the insistence of my junior high coach.  Despite the words of wisdom from Hershberger I continued the practice until the following spring.  Of course as soon as I switched my times dropped dramatically.

Hershberger was a fixture at the Kansas Relays.  It amazed me that a man in his 40's could hammer 880 yards at close to 2 minutes flat.  He ponied up the money to build the synthetic track at Kansas and spent lavishly in other ways to support the Kansas track and field program.

But he was polarizing.  His love of the limelight could be off putting to some people.  He made it to the pages of Sports Illustrated in 1981 when he created his own athletic challenge involving multiple sports at age 50.  The competition was something of a precursor to the sports crazes that athletes now compete in like cross fit.

It ended in the late 1980's for Hershberger in a fraud scandal.  I'm ambivalent about what happened.  Part of me wants to believe that Jim was a fall guy, done in by a subordinate looking to save his own hide.  Nevertheless, Jim Hershberger went to federal prison for his supposed crimes.  His family says prison changed him.  My friends who knew him say that he never showed that in public.

I last saw Jim about three years ago at a gathering of Kansas alums in Fort Myers.  I didn't know it but he was already suffering from Alzheimer's.  He was the same Jim Hershberger, smiling and ready to tell a story.  I write about it because Jim was a trailblazer for age group competitors.  He kept competing in his 40's and 50's until his body wouldn't let him anymore.  He certainly had the broken bones and surgeries to prove it.  In a sense I still run and compete because of what I saw from Jim Hershberger 40 years ago.  Thanks for the advice Jim and for daring to compete at the highest levels.
Posted by Rink's Ramblings at 9:21 AM