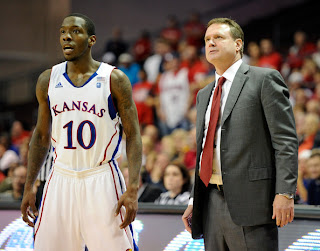 Tis the season to write about Kansas basketball.  After watching four of the Jayhawk's first five games I've come to one conclusion.  This team will only go as far as Tyshawn Taylor can take them.

Kansas should have beaten Duke last night.  Taylor's 11 turnovers insured the Jayhawks wouldn't.  It was pretty much the same story in the loss to Kentucky.  Taylor and his back court cohort Elijah Johnson were very sloppy with the basketball.

This is going to be a very long and trying season for Kansas fans.  Oh, this team will get to 20 wins barring a major injury and it will make another visit to the NCAA tournament, but it won't be pretty.  This team will have to play scrappy, hard-nosed basketball, to win games.  Everyone knows that this team has no bench.  The starting five will have to carry the load.

The most pleasant surprise has been the arrival of Jeff Withey.  He's gone from being a poor man's Eric Chenowith to a reasonably good post player.  He's got the best hands I've seen on a Kansas big man in a long time and can rebound and block shots.  He can't finish worth a poot around the basket but I've got a feeling that by next year he'll be a double digit contributor in the paint on a regular basis.  Withey and sure to be All-American Thomas Robinson almost make the loss of the Morris twins bearable.

But back to Taylor.  He's as entertaining as he is frustrating.  Tyshawn is trying to grow into his role as the team leader.  If he does the Jayhawks will be a very, very tough team to deal with by the end of the year.  But if he continues to slip into his lackadaisical street ball style that gets him in trouble on the court not to mention his off the court antics, then Jayhawk land had better be prepared to deal with the bitter and the sweet.
Posted by Rink's Ramblings at 8:39 AM