Sorry, I couldn't help myself.  It doesn't matter where you stand on the debt ceiling ruckus going on in Washington, D.C.  What's amazing is that John Boehner, Speaker of the House, can't get his own party in line for a vote.  Besides witnessing a economic meltdown, we are surely watching the end of Boehner's short reign as Speaker. 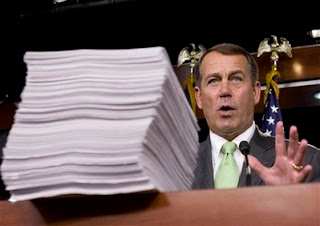 I almost feel sorry for the Ohio Republican.  I think he would have gone for historic proposal to cut spending and raise taxes as part of the debt ceiling deal discussed more than three weeks ago with President Obama.  But Boehner couldn't control the Tea Party segment of the Republican Party.  I also suspect the intentions of Majority Leader Eric Cantor.  It strikes me that Boehner's right hand man in the House covets the Speaker's job more than anything. If John Boehner is Speaker by the fall I would be shocked.

As for the debt limit fight, there's plenty of blame to go around.  Republicans want to blame President Obama for the economic mess while conveniently forgetting how George Bush's policies landed us in this mess in the first place.  Two wars unpaid for, a drug plan unpaid for, and a nice tax cut for wealthy Americans.

The President contributed to this mess.  The stimulus spending plan he produced in the first few months of his presidency was nothing but pork.  Instead of spending money on infrastructure projects that would have created thousands of jobs he was steamrolled by his own party and much of the money went for pet projects pushed by Democratic members of Congress.

The healthcare reform bill missed the mark as well.  The country needs to get its healthcare house in order.  But once again President Obama's approach missed the mark.  Competition is the key along with tort reform.

One final thought as the clock ticks down to August 2nd.  The Tea Party is on a path to help destroy what's left of the the Republican Party.  Their unending push for a balance budget amendment is a red herring.  Think about it.  Even if the House and Senate would vote for the amendment it will take a minimum of two years just to get the amendment through all of the state legislatures in the United States.  That means it would be 2013 or 2014 at the earlier that it becomes the law of the land and more likely 2015 or 2016.

The Tea Party can stand by its principals, wreck John Boehner's political career, and destroy the life savings of the Americans who can least afford the economic fallout a debt default will help bring about.  In doing so they will breathe new life into the unions and sway more independents back to the left.  The Tea Party doesn't care, they just want to get that black man out of the White House and they see this as the best way to do it.
Posted by Rink's Ramblings at 8:02 PM