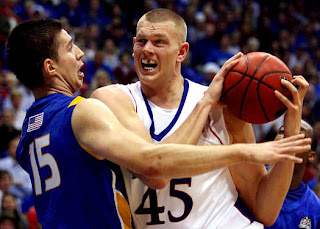 Okay, it's way too early to think about a national championship.  Kansas is off to a good start and ranked #1 in the country but this team is a long way from being a Final Four caliber squad.  It boils down to two things, toughness and scoring.  The 2008 national champion Jayhawks had both.

On any given night Brandon Rush, Darrel Arthur, Mario Chalmers or Sherron Collins could fill it up.  This version of Kansas right now has two proven scoring options, Collins and Cole Aldrich.  Super frosh Xavier Henry has shown he can score but he hasn't had to do it yet in the clutch.  As much as it pains me to say it nobody else on this squad can really light it up.  Tyshawn Taylor, the Morris twins, and Tyrell Reed don't have the game that Rush, Arthur, Chalmers, Collins gave the Jayhawks in 2008.  The wildcard is another freshman Elijah Johnson.  He's got a nice shot and has shown the ability to penetrate but we won't really know about him or Henry until we get into the conference schedule.

That brings us to the toughness issue.  Nobody was tougher than Russell Robinson.  Sasha Kaun was a banger, a big time banger.  Both Rush and Chalmers could defend.  There is nobody on this edition of the Jayhawks that has shown the kind of toughness that Bill Self craves.  Sherron Collins loafs on defense more often than he should.  Cole Aldrich has shown he can be pushed around.  Don't get me wrong,  Cole is an intimidating prescence in the middle.  His shot blocking and rebounding rank him as one of the all time greats in both categories in Kansas history.  But there are times he gets knocked off his game.  Cole had his hands full with the big guy from Radford.  They didn't double team that dude for nothing.  Fortunately not many college teams have true centers anymore.  That brings us to the Morris twins.  I think the off-season conditioning program showed a willingness to buy into the tough mentality that Self demands.  Again, we'll know for sure if they can bring it during the conference schedule.

That leaves four players, the two freshman and the currently benched Brady Morningstar and Taylor.  Henry plays defense like a freshman, Brandon Rush he's not, while I haven't seen enough of  Johnson to pass judgment.  Morningstar's return will force the freshman to play defense.  His tenacity is off the charts.  And then there's Tyshawn.  His ability to D up will make or break his playing time.  He's got the quickness and he appears to have the toughness but you've got to wonder why Self benched him this week in favor of Johnson?

Don't get me wrong, Kansas is good, very good.  But Memphis showed that a quick, physical team, can throw these guys off their game.  Henry and Johnson will have to grow up in a hurry if this squad wants to be dancing in April.