The Czarina Meets The Governor 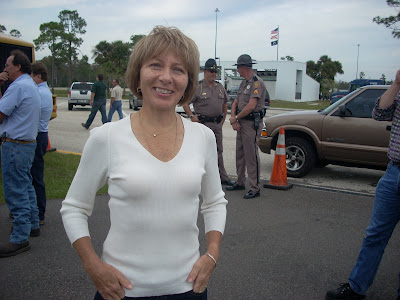 It's been a tough week for the Czarina.  She's had to put up with two obnoxious men in the house for the last six days (me and the Boy) and it's beginning to wear on her.  It started coming to a head two nights ago when we watched a DVD of the movie "Up" as a family.  The Boy and I decided to start calling the Czarina "Kevin" in honor of one of the principals in the movie.  I won't go into a lengthy explanation as to the significance of our joke but needless to say it created a fair amount of laughter for the two trouble makers and unending source of consternation for the Czarina. 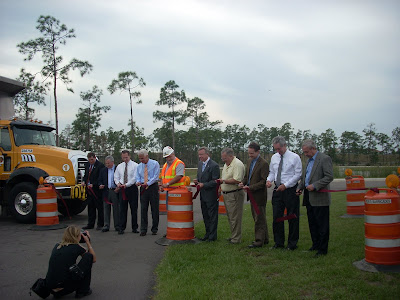 That brings us to the events of today, a ribbon cutting ceremony for completion of the iROX project.  I was the communications manager for this 435 million dollar interstate expansion until a few months ago when they started laying folks off.  Unimaginably they actually finished a 30 mile expansion of I-75 a year early.  Anyway,  I was invited to attend (and lend a hand to my pal Dave) and so with much glee the wife sporting her new hairdo came along for the festivities. 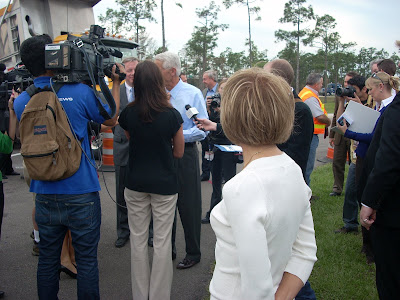 The Czarina was bound and determined to meet the Governor of Florida, Charlie Crist.  I was a little concerned earlier because she nearly jumped up on stage during his speech before the ribbon cutting.  I figured security was keeping a close watch on the Czarina as she moved in on her quarry. 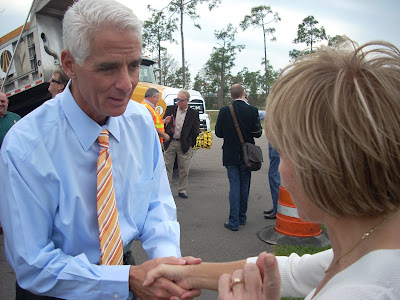 My fears were quickly eased when she got her chance to meet Governor Crist.  The Czarina just wanted to thank the Governor for the widening project.  You see she has to drive a 26 mile stretch of the interstate everyday and the extra lane will make that commute a lot easier. This picture turned out pretty good.  That's Lt. Governor Jeff Kottkamp on Governor Crist's right.  The Boy was there taking photos of the event as well.  When I get a chance I'll post them on Facebook.  The event and meeting Governor Crist lifted the spirits of the Czarina. The Governor made a point of telling reporters that she was an example of why the highway needed widening.  That brought the biggest smile to her face and as Andy Warhol would say, she had gotten her 15 minutes of fame.

Posted by Rink's Ramblings at 3:09 PM