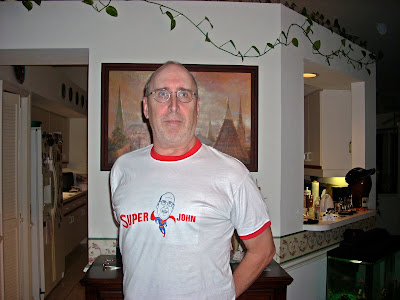 I turned 54 today.  As you can see, I got an appropriate gift from my step-daughter, son-in-law, and delightful granddaughter.  As readers of this blog will remember the old man had ruled the roost at a family race in Riga last spring.  Besides the fabulous t-shirt which attests to my prowess as the family's best runner I got a handmade card from little Masha wishing me a happy birthday.

The last year has been a tough year physically.  It started with a bad case of plantar fasciitis that made running almost impossible.  Then I pulled my right hamstring in March and again in August.  Since August I have struggled with a sciatica problem in my right hip.  The hip hurts all the time.  It actually feels better running but when I sit for long periods of time it's impossible.

I started running every day again just three weeks ago.  So this afternoon when I went out for a ten mile run along our favorite trail that borders the 6 Mile Cypress Slough.  The Czarina insisted on coming along knowing full well I was short on fitness.  She was determined to show no mercy.  By two miles she was a good 100 yards down the trail in front of me.  By five miles her lead had stretched to 200 yards. I was chugging along at about 9:40 per mile.  We made a pit stop at McDonald's and started heading home.  The Czarina wasn't happy because she wanted to loiter longer so by the time she started moving I was a good 50 yards ahead of her.

About three and a half miles from home she pulled up along side me.  I was going pretty good clipping along at just under 9 minutes a mile.  About one minute into our brief moment of togetherness the Czarina suddenly bolted ahead quickly opening up a 20 yard gap.  She was moving in earnest apparently intent on teaching me a lesson.  But just as we hit the seven mile mark she suddenly came to a halt  and as I rolled by her she yelled, "Why are you doing this to me?"  I responded, "Is there a problem?"  The Czarina shot back, "Why don't you slow down!"

I just kept plugging along.  I must have gotten a good 300 yards ahead of her before I stopped for water at a county park just two miles short of home.  When I came out of the park the Czarina was passing by and had a good 50 yards on me.  I caught up to her within a half mile and startled her saying, "You know what?  Husband is still the king," as I ran by her and on to the last mile and a half home.  She meekly responded, "Old Bonka is back."  Bonka is her term of endearment for me.

I didn't run particularly fast for the 10 miles but the message had been received by the Czarina.  No matter how old and infirm I may be and no matter how fast she thinks she can run I can always run her down and make her suffer.   Just as I did in Riga in May 2009. 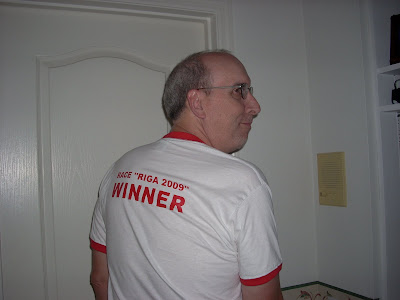 Posted by Rink's Ramblings at 8:03 PM