For the Czarina, it was a dream come true, returning to her home to run a marathon. I'm sure growing up she never envisioned that she would run 26.2 miles in the beautiful city that she used to call home. Nordea Bank had taken over sponsorship for the race and even offered some decent prize money which attracted some top level talent the last three years.

The race also featured a half marathon, which I had planned to run until a leg injury had curtailed my training. Marathon fever had also infect the Czarina's daughter and her hubby. Since the arrival of the little Princess a little over two years ago, both parents had packed on some pounds. So they trained for the 5K fun run which I decided was safe to run. A little side wager with the son-in-law of 10 Lats (20 Dollars) only added to the fun.The only negative is that the organizers did a horrible job of controlling the start line. Five thousand participants were on hand for the 5K and at least a couple of hundred costumed buffoons were up front. I wiggled my way up to within 20 feet of the start line, positioned just below the city's historic Old Town along the Daugava River. My nemesis was a good hundred yards behind stuck in the masses. 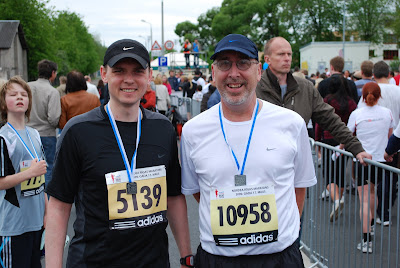 The gun went off and I felt pretty good as did the leg. But just before the mile mark the son-in-law went striding by. I tried to keep pace but to no avail. He steadily pulled away hammering me by almost a full minute. The son-in-law was 190th out of the 5,000 plus runners, I came in at 296. The course was nearly two-tenths longer than a true 5K. 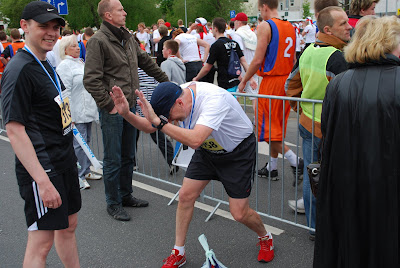 It wasn't long before the step-daughter made it in happy that her ordeal was over. 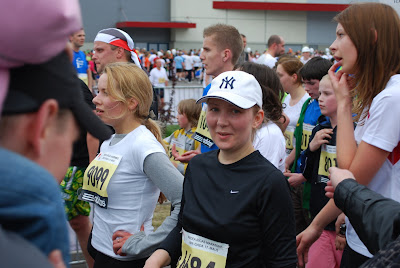 The little Princess was happy that both parents were back. 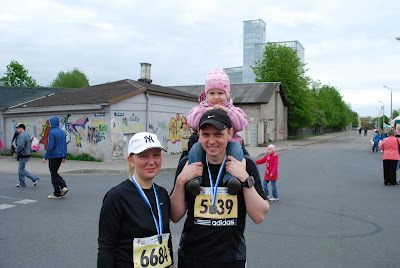 The marathon started some 15 minutes after our race with perfect temperatures and overcast skies. We waited for the Czarina and she came by looking full of run, moving easily. The goal was to break four hours. 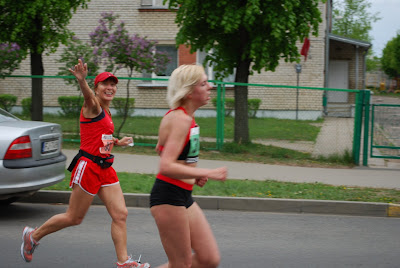 I went back to the hotel to clean up and went back out to the course just a couple of blocks away. The race wound through the heart of the city taking two loops. I saw her again at about 18 miles. She looked tired and was in desperate need of a pit stop. Unfortunately the port-a-potties were occupied by spectators so she lost a couple of minutes before departing again.

We waited near the finish... and waited... and waited. Finally the Czarina appeared... looking worse for the wear. But she managed a smile and motored through the final mile. 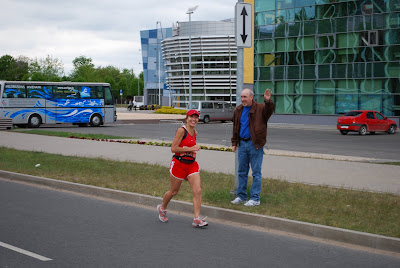 The time was about 4:20. The lack of water stations and stomach problems had done her in. It was that free breakfast at the hotel she would later claim. I think it was all the walking around the Old Town the day before. I had told her she needed to rest. In the end it wasn't nearly as catastrophic as we had feared. The Czarina had captured her age group title which helped make up for a disappointing time. 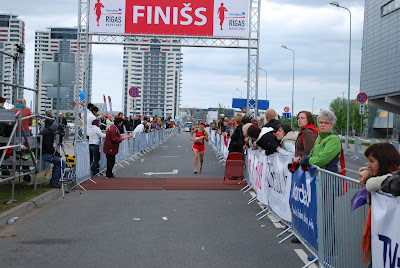 But there was no rest for the weary runners. I had a plane to catch to St. Petersburg, Russia.
Posted by Rink's Ramblings at 6:41 AM