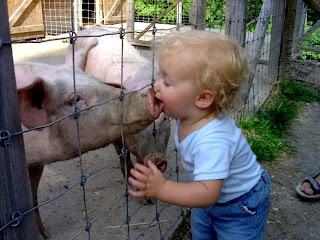 Had to take one more swing at the swine flu simply because of this picture. It's been two weeks and I'm still tired.

I haven't run in nearly a month now (except for a couple of test jogs) because of a bad hamstring. The last time this happened was back in 2003 when I was preparing for the Boston Marathon. I didn't run for two months. My hammies are a mess. It all started back in 1994 when I was unemployed for about three months and all I did was run. I was in monster shape and went and ran a 10K and tore it. I kept re-injuring it over and over again for the better part of three months. The injury happened in May and I didn't get back to any serious training until October. I want to avoid the same fate.

It's going to be tough because I'm supposed to run a race with my wife in less than two weeks. I'm going to try and go jogging this weekend. If I can make it a couple of miles without any problems then there's hope, but I'm not counting on it. I'm guessing I won't be back to any real running until June.
Posted by Rink's Ramblings at 12:24 PM