If it's Thursday it must be Belgium

Time now to tell the tale of my adventure to Eastern Europe. The Czarina and I headed to Latvia on Wednesday May 13th. The journey was two-fold; first most importantly to meet my 32 month old granddaughter and second, meet with Russian television journalists in an attempt to help them become better story tellers.

The first leg of our travels took us from Fort Myers to Chicago and then to Brussels, Belgium. That stop in Brussels was the real wild card in this trip. I had found super cheap tickets to Brussels on American Airlines ($420 a piece round trip) and had booked cheap tickets on Air Baltic to Riga, Latvia. The problem was we had one hour and five minutes between flights.

First off, we arrived late. The flight crew realizing our problems moved us up to business class to help us get through customs and to baggage claim in a hurry. American wouldn't transfer our luggage automatically to Air Baltic so that meant we had to claim the bags. Once we got to the claims area we realized we were rapidly running out of time. Somehow the Czarina dialed in on an office that does the transfers and got it arraigned to get our bags transferred to Air Baltic while we made a mad dash to security.

When we arrived the line was staggering. Dozens of people stood in front of us but the Czarina was not deterred. Moving like a fullback through the defensive line we knifed our way up to the front, followed by a couple trying to get to Hungary who had been on our Chicago flight. We hustled through security and made it to the Air Baltic ticket stand with 15 minutes to spare. 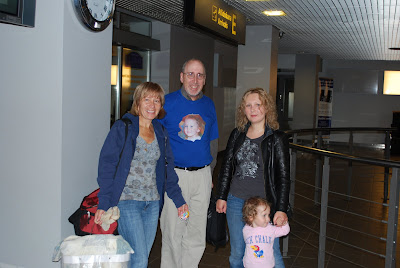 We made it to Riga but unfortunately our luggage did not. Regardless the family reunion with the granddaughter I had never met went about as I expected. She's a very intelligent little girl (witnessed by her taste in sweatshirts) but it would take quite some time to break down the walls.

The bags would arrive around midday on Friday. It was a big relief. We needed our running gear for Sunday's big race, the Riga Marathon awaits.
Posted by Rink's Ramblings at 8:52 AM